We were so excited to arrive in South Korea as we were anxious to visit the birth country of our son-in-law, Sae Cho (Brittany’s husband) and we were not disappointed.  We docked at Incheon, the largest seaport city in Korea with a population of 2.5 million.  Human settlement at this location goes back to the Neolithic Period and Korea has a 4,000 year-old history.  Incheon is considered to be a part of the greater Seoul metropolitan area due to part of it bordering the capital and their subway systems are connected, but it is actually a separate jurisdiction.


Korea, of course, is a divided nation.  With a total population of just over 73 million, South Korea has 49 million of this total and Seoul alone has 24.5 million residents.  Korea is a peninsula jutting down between the Yellow Sea and the Sea of Japan and has only been divided since 1940, being a united nation since the Middle Ages with a common history and common culture.  Also, a common enemy, Japan, which occupied but also modernized Korea, building a network of roads, bridges, railroads and heavy industry.  During WWII, no battles were fought on Korean soil thanks to the connection with Japan.


Unfortunately, by the end of the war, Korea was controlled by the Soviets under communist ruler Kim Il-sung.  After Japan was evicted Soviet entry led to growing disputes with the southern part of Korea. Moscow scuttled the United Nations trusteeship and the economy went into a freefall.  In 1947 the UN committee on Korean sovereignty sought recognition for a unified Korea but the Soviets refused to reconcile and the U.S. only recognized the south.


North and south went to war in 1948 with Premier Joseph Stalin and Chairman Mao Tse-tung’s blessing and support of Kim.  A combination of U.S. and U.N. forces were deployed in Korea in the fall of 1950, led by General Douglas MacArthur, landing at Incheon.  It was a brutal war, with the tide changing several times and resulting in over 120,000 combatant deaths.  Finally, in 1953 an armistice was signed with the dividing line being the 38th parallel creating North and South Korea.  The South Korean people were thankful for the U.S. sacrifice in helping to keep communism out of their country and many of the Koreans we met on our tours expressed that thanks verbally and in their actions.  It was quite satisfying to finally be with people on the other side of the world who actually like Americans.


Syngmon Rhee ruled South Korea from 1948 to 1960 but it was far from a model democracy.  Elections were controlled by force but he was ousted after the 1960 elections and new President Park Chung-hee instituted a 5-Year Plan calling for economic reform, a restriction on imports, a reduction in domestic consumption, providing cheap government loans and tax breaks to stimulate industrial production.  As U.S. and Japanese relations improved and American involvement in the Vietnam War escalated, the South Korean economy boomed.  In the 1960’s S.K. GDP rose by an average of +8% a year.  Their economy was based on the Japanese pattern and continued rapid growth throughout the 1970’s with huge increases in industry.  Samsung became a giant company representing 25 % of the total GDP of South Korea.  The middle class increased by 50 % and agriculture, like most developing nations, shrank as a percent of GDP.  In 1960, agriculture was 60 % of GDP.  By 1970 it had shrunk to 37 % and today it is only 5 %.


While the growth rate has slowed in recent years and S.K. went through a tough year requiring assistance from the International Monetary Fund, today the balanced economy provides a per capita income of $ 32,000.00 and is the 15th largest economy power in the world. The first woman president of South Korea and a staunch progressive conservative, Park Geun-hye, presides over a prosperous country with a GDP that is twenty times larger than the dysfunctional and communist-controlled North with its decidedly wacko dictator, Kim Jong-un.  Last month, Kim killed his own uncle, whom he thought was attempting to overthrow his government.  He keeps sable rattling and threatening world peace and action against South Korea and Japan by firing dud missiles into the Japanese Sea and Pacific Ocean and proclaiming his right to be a nuclear power.


Despite the disparity between North and South, the sincere and stated objective of both halves is to be united again into one country. It is a consistent theme in every presentation and outward signs of the unification movement were everywhere we visited.  Our tour guide believes unification will happen within ten years.  Our expert lecturer doubts that timing unless there is regime change in North Korea.


We visited two sites that highlight the division between these two countries in the Demilitarized Zone.  The DMZ is the strip of land and river running across Korea roughly following the 38th parallel.  It is 160 miles long and up to 2.5 miles wide.  A high metal fence with razor wire tops runs the entire length on either side of the DMZ with guardhouses and pill boxes every few hundred yards.  It is manned, day and night, by the armies of both countries, each “protecting” their own side.  Civilians are not allowed in the DMZ but we got special permission to pass through it on our way to the North Korean side to visit and go down into Tunnel # 3.  The 3rd Tunnel is one of four interdiction tunnels constructed by the North Koreans after the Armistice was signed and were first discovered in 1972.  The first of these secret tunnels were found based on information received from a North Korean defector and the last one was found in 1992.  No one knows exactly how many more they might find but the search continues for what some believe might be twenty more.


The 3rd Tunnel is about six feet tall and six feet wide and has the capacity to move between 10,000 and 30,000 troops an hour from North to South Korea, entering south of the DMZ approximately a half mile past the Military Demarcation Line (MDL).  The tunnels were used for numerous incursions by the North and those incursions, along with firing across the DMZ has resulted in 120 south military deaths along with 20 U.S. soldiers from 1953 to 1999.  No large scale invasion was ever attempted and now the four discovered tunnels are blocked to prevent further use.  The tunnel was chiseled by hand tools at a depth of 240 feet below the surface through solid granite and runs approximately 1.5 miles under the narrowest parts of the DMZ.


Our first stop was the “Freedom Bridge”, the wooden bridge over which tens of thousands of Koreans escaping the communist North fled right after the Armistice was signed but before the borders were closed and the DMZ was formed.  Then we traveled through the heavily guarded DMZ and thorough passport inspection stations to the 3rd Tunnel and went down inside to transit a 600 foot section of the actual tunnel.  Sorry, no photos allowed of the tunnel and I was not supposed to take photos of the DMZ from the Unification Center, but I did not know that so you can see those foggy shots below.  My bad.


Seoul was a city we would like to have seen more of but we walked the streets of Incheon deep into the local neighborhoods to try to find some authentic Korean clothing items.  All we found was Western shops full of Western clothes; LaCosta, FootLocker, Nike, Levi, L.L. Bean, etc.  We couldn’t even find a T-shirt with “Korea” on it but we saw NY Yankee caps, I (heart) NY tees….hell, even a Georgia Bulldogs sweatshirt.  What!!??  So we left with a few magnets and a couple of DMZ T-shirts from our tour.  Oh well, maybe next trip.


Below is the difference between the Korean alphabet (26 letters) and the Chinese “alphabet” (4,000 characters).  Think back to your time in the first grade….which would you prefer to learn?


I will give $ 20.00 to the first person who can provide me with the correct translation of both.  Sailing for Dalian, China and will be there at noon.  Until then, 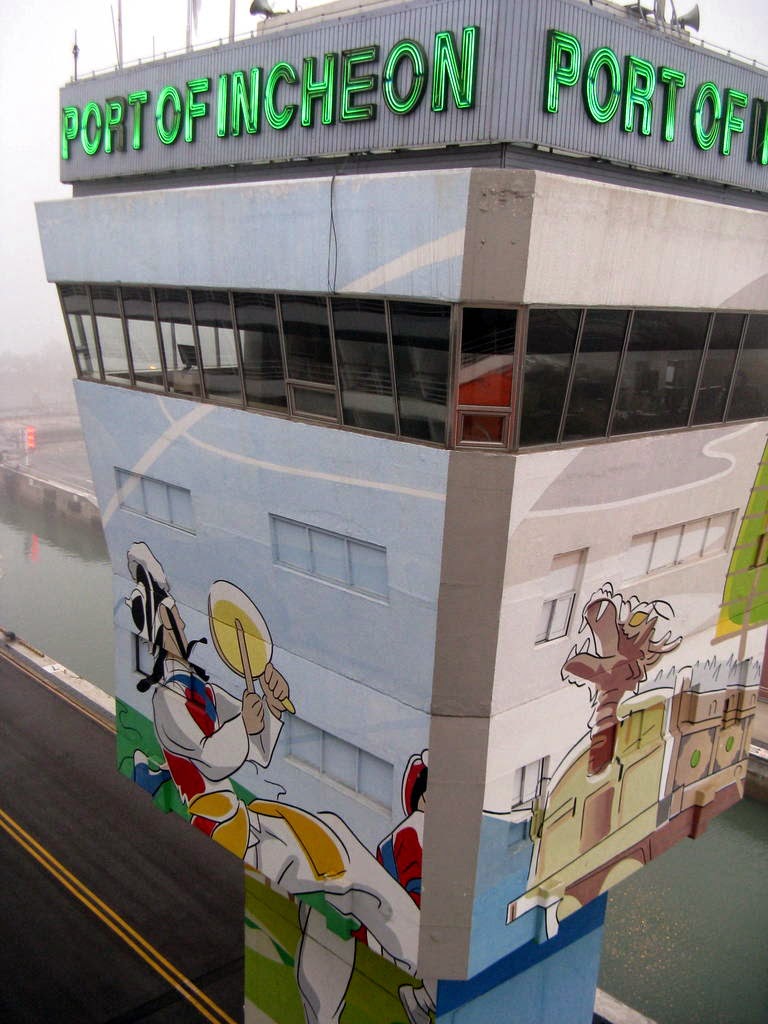 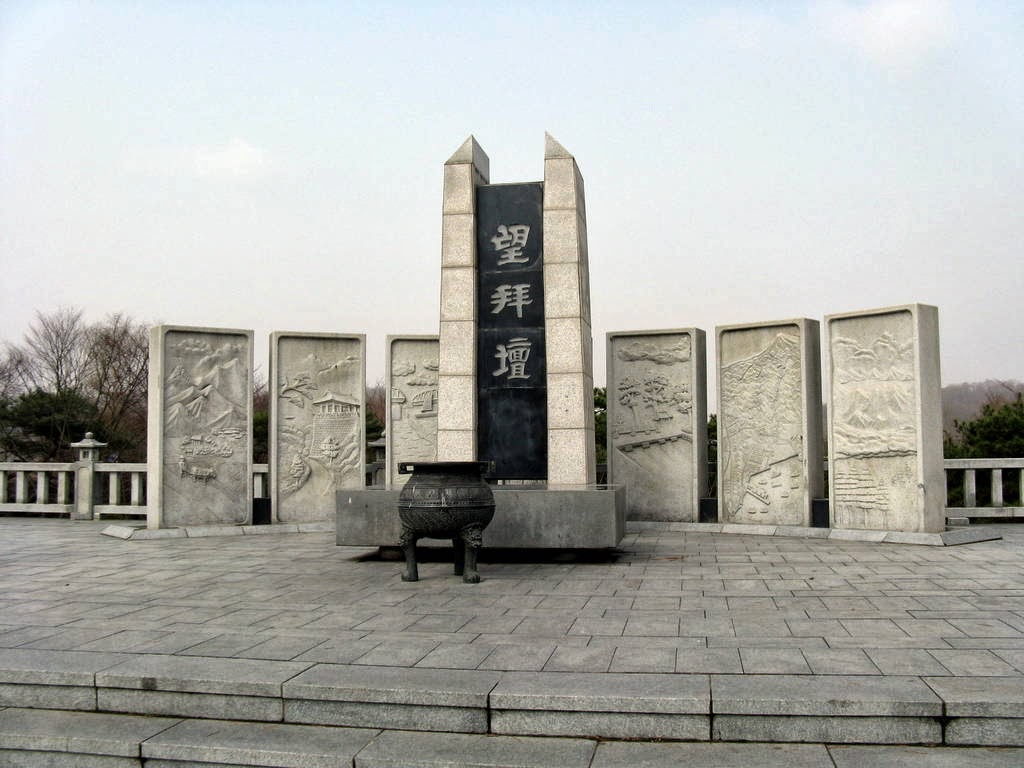 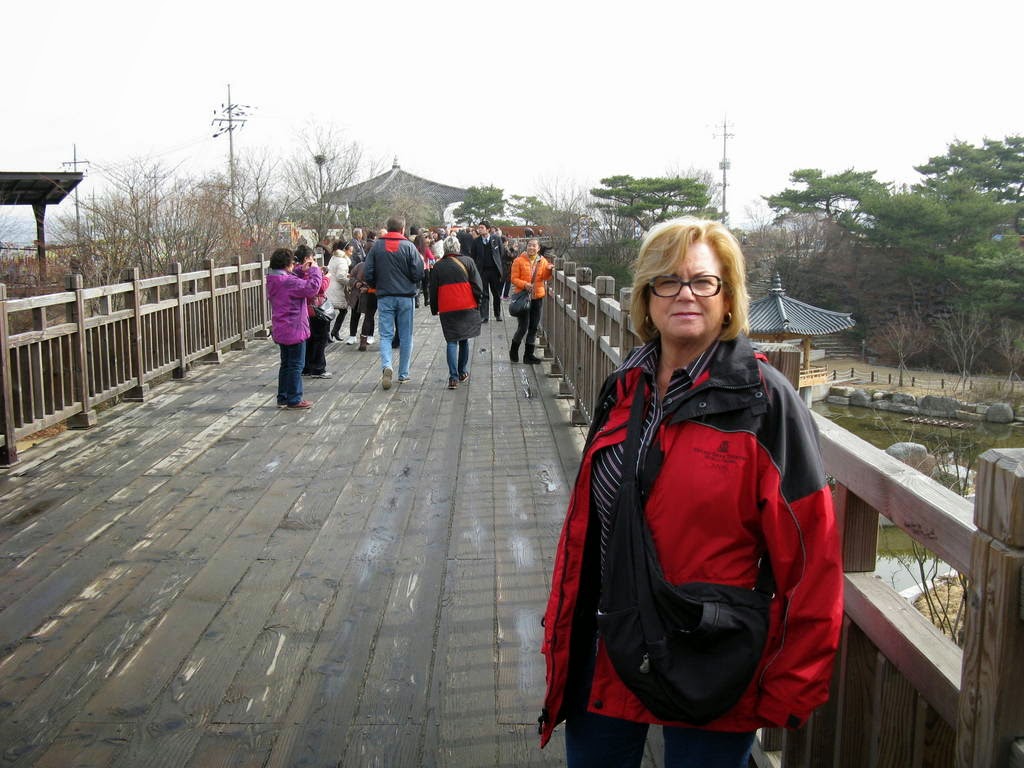 Petitions on the MDL fence for a unified Korea 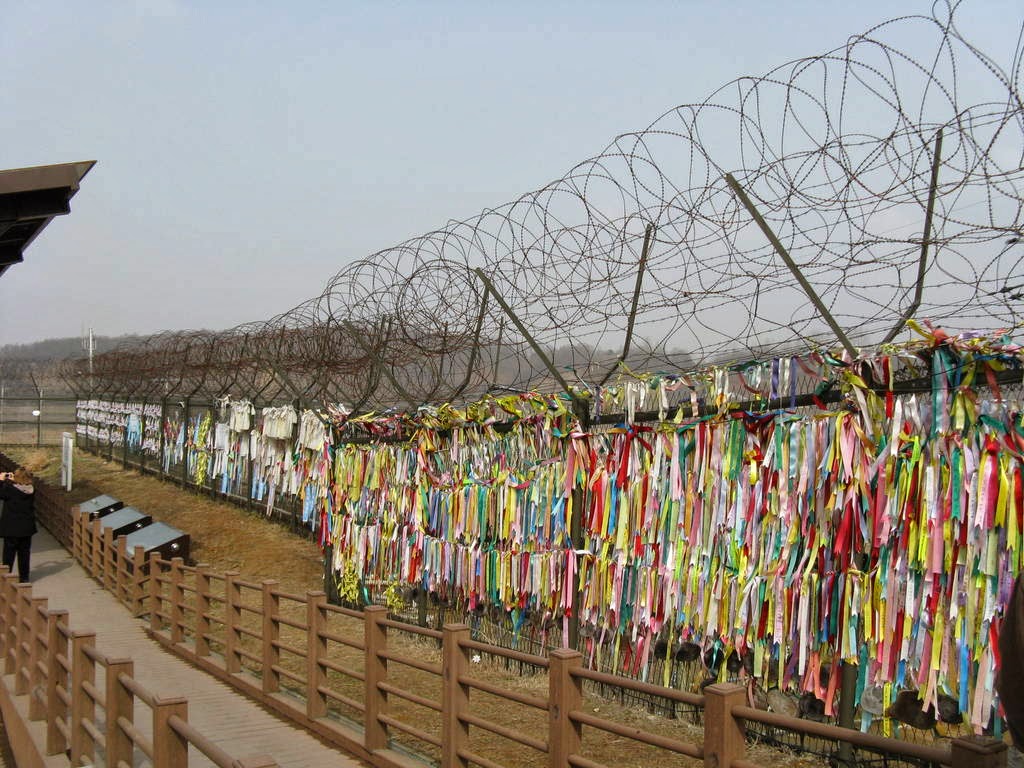 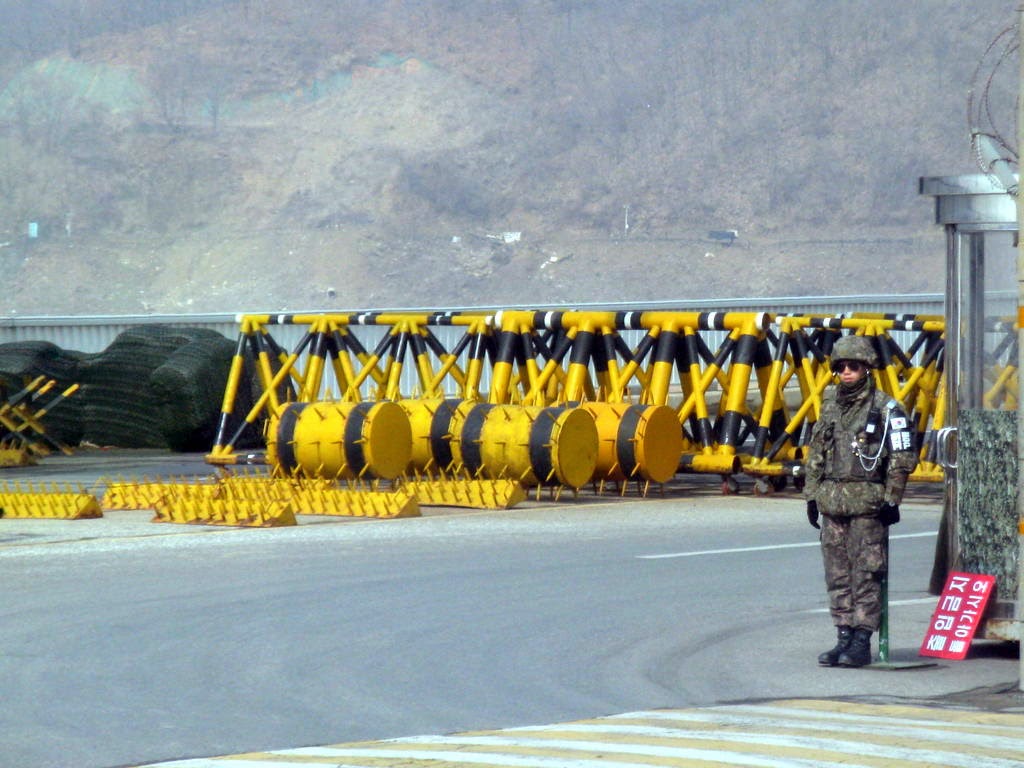 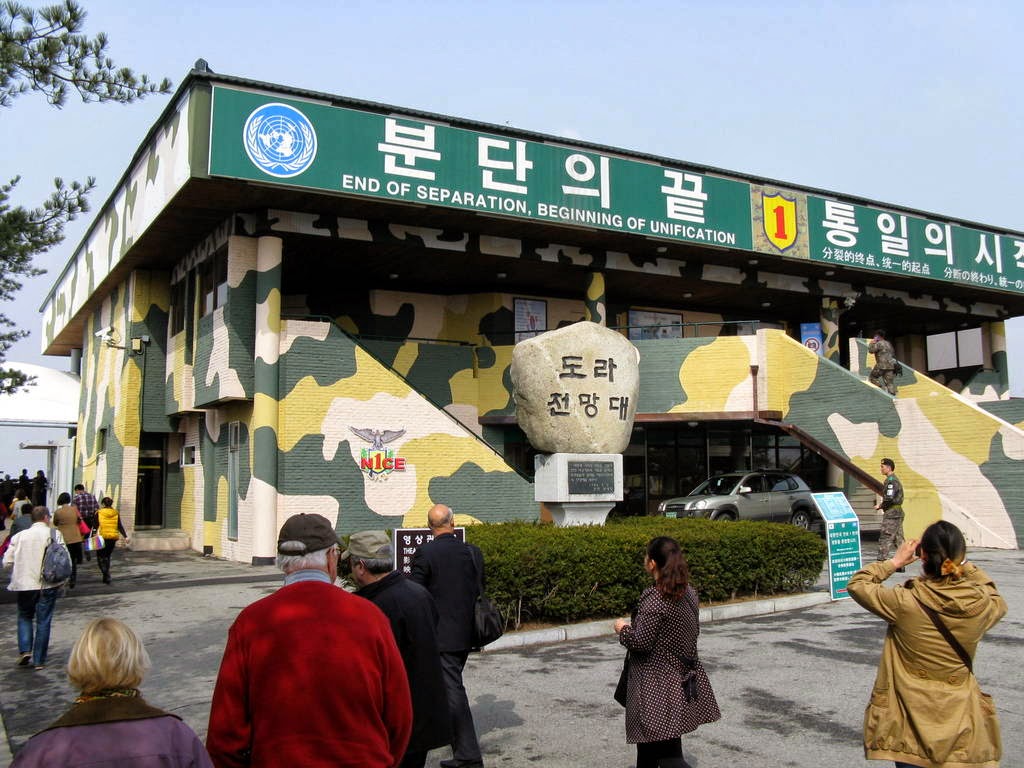 Spirited photo of the DMZ on a really foggy day 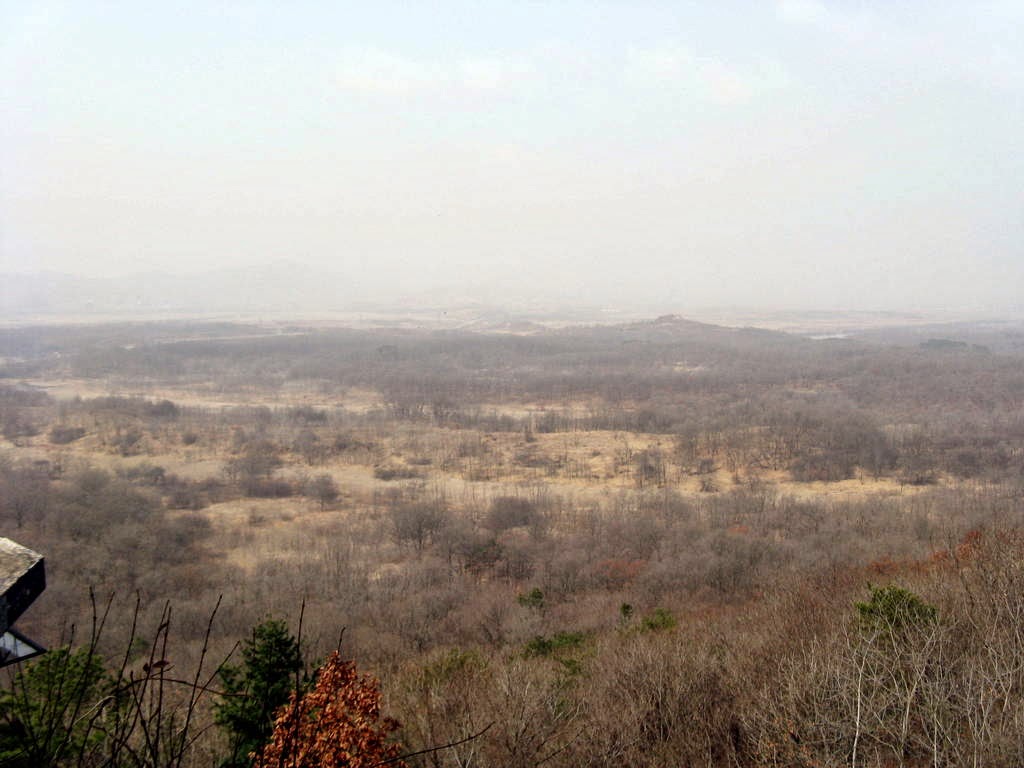 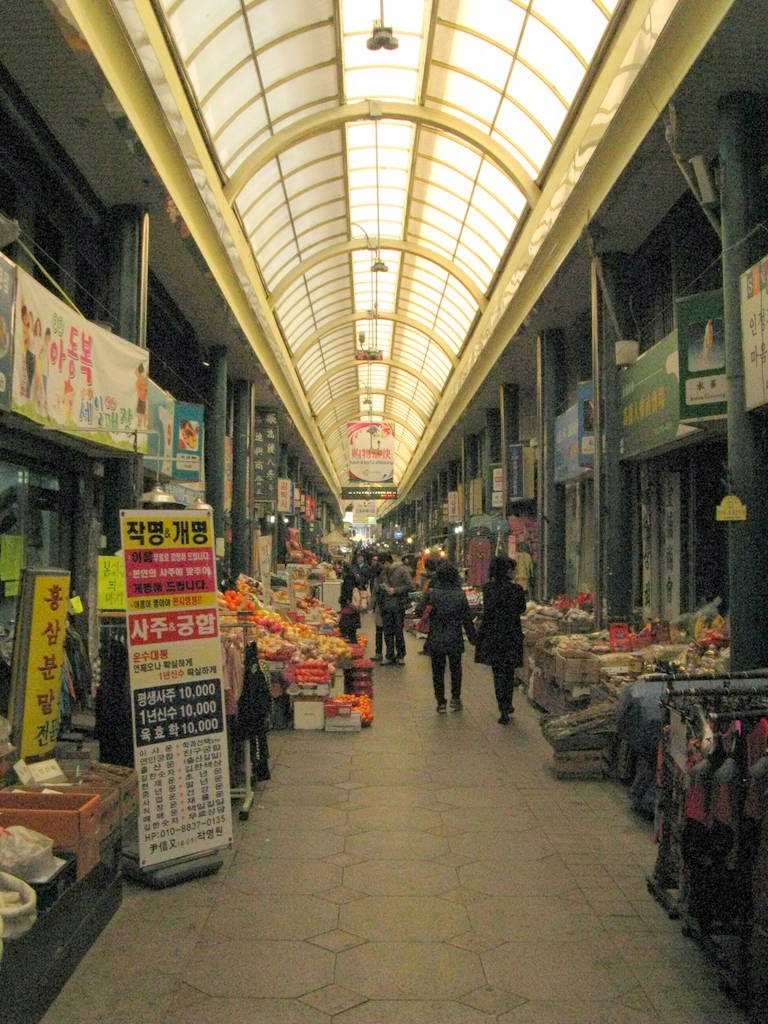 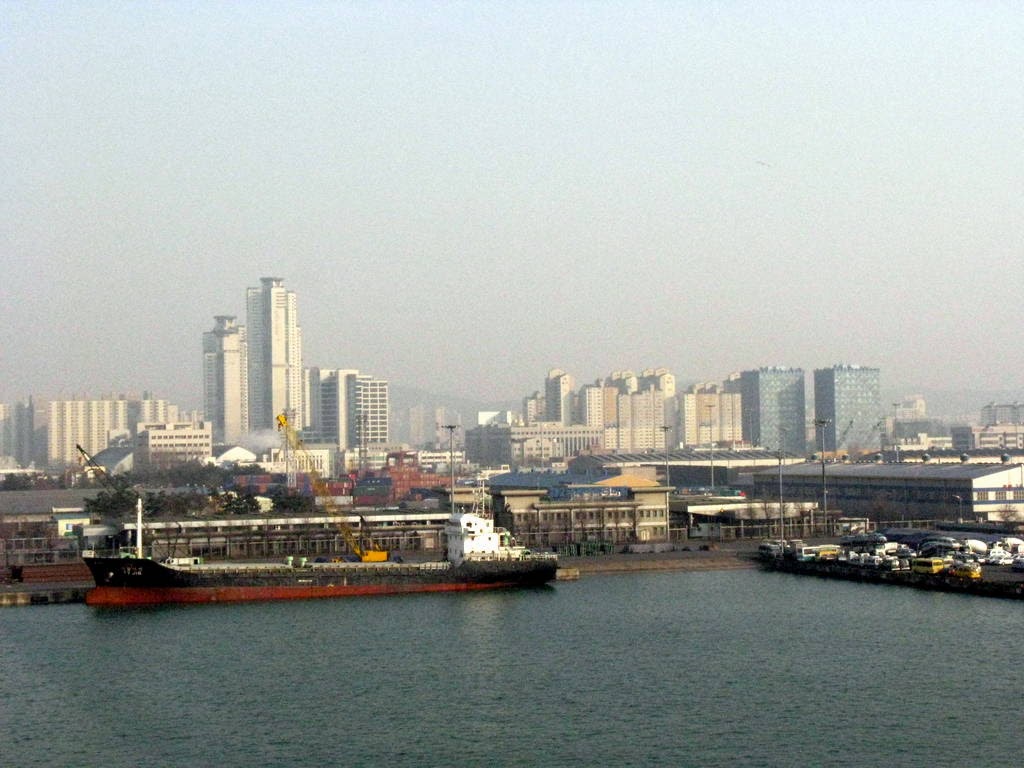 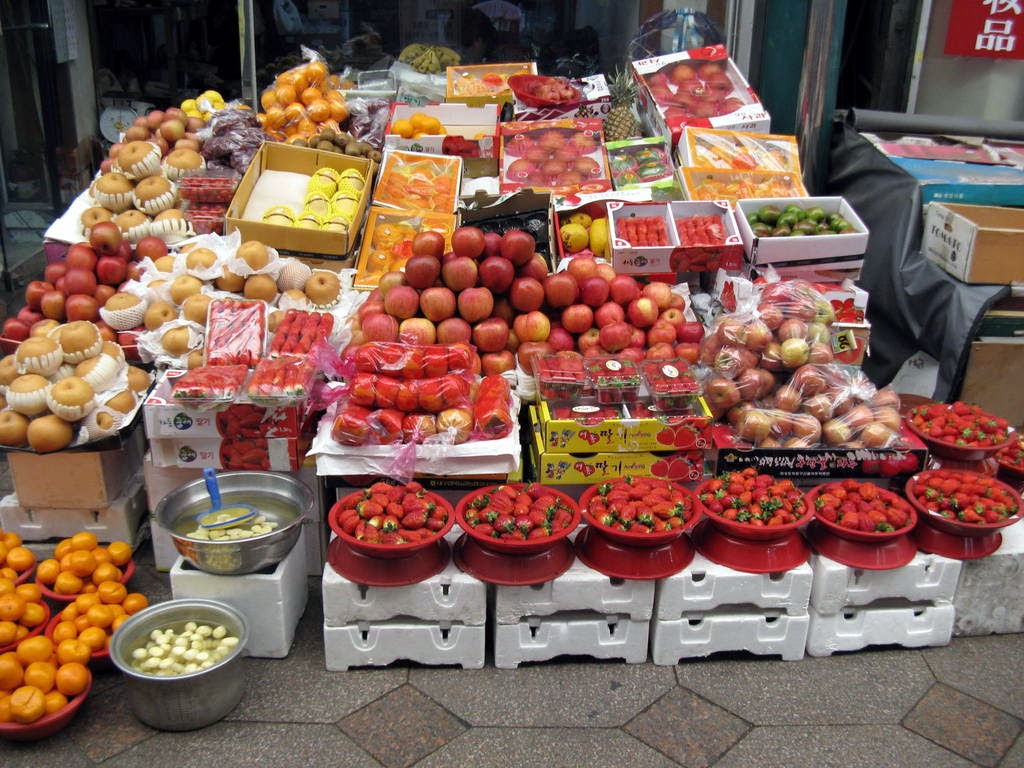 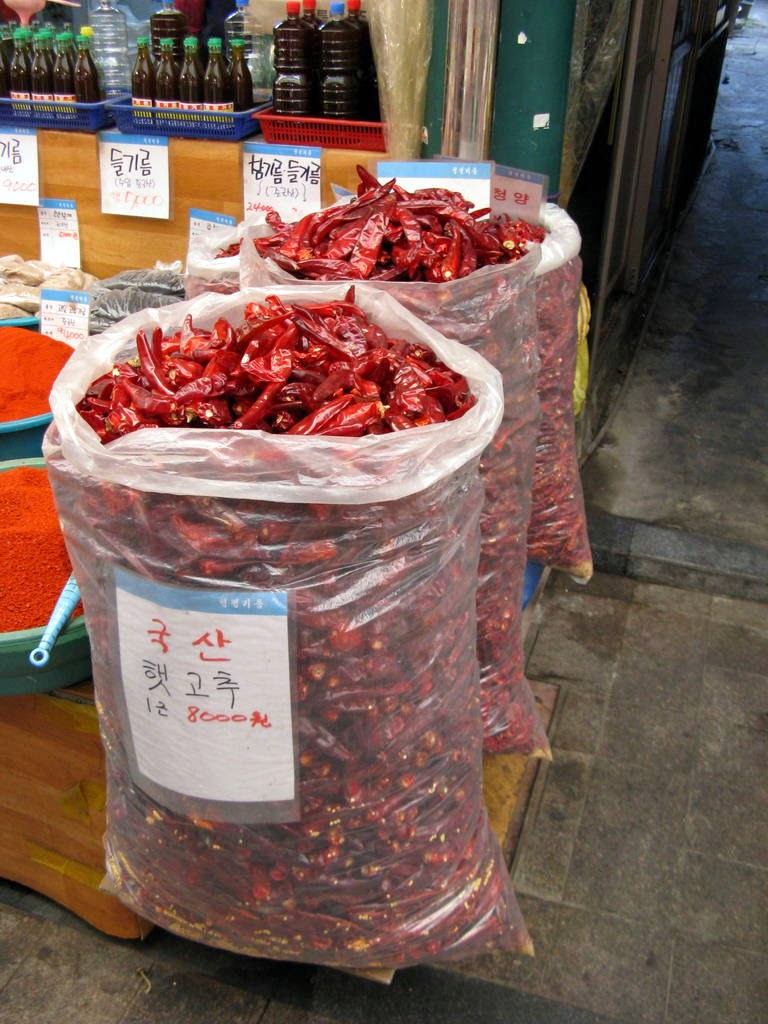 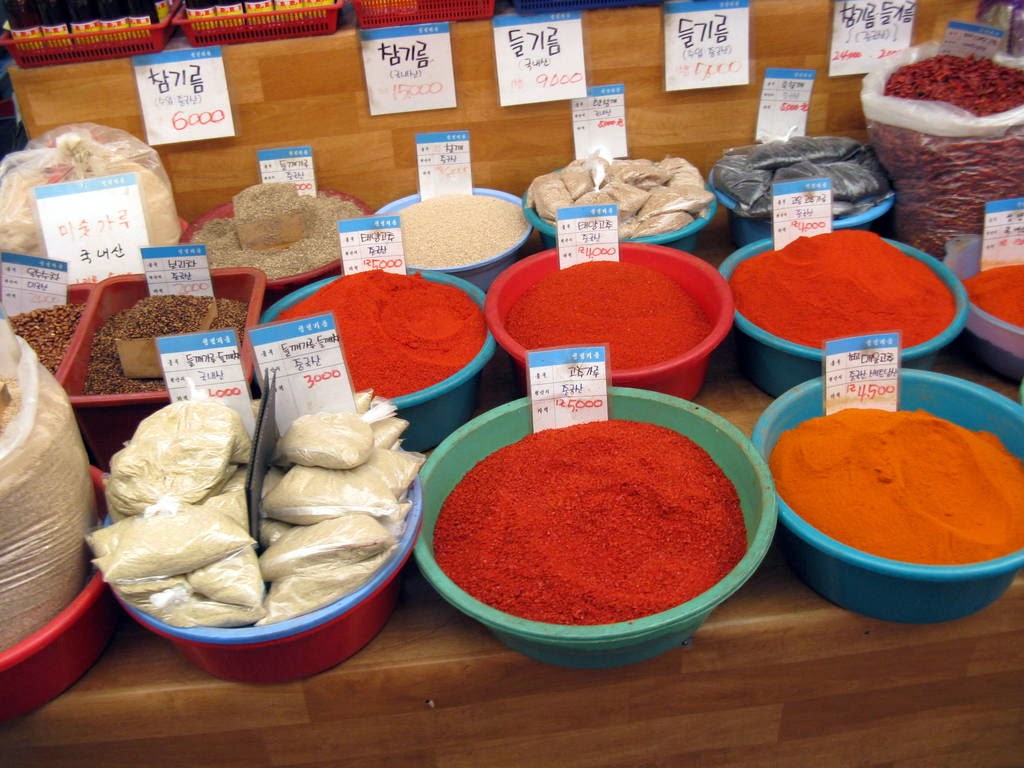 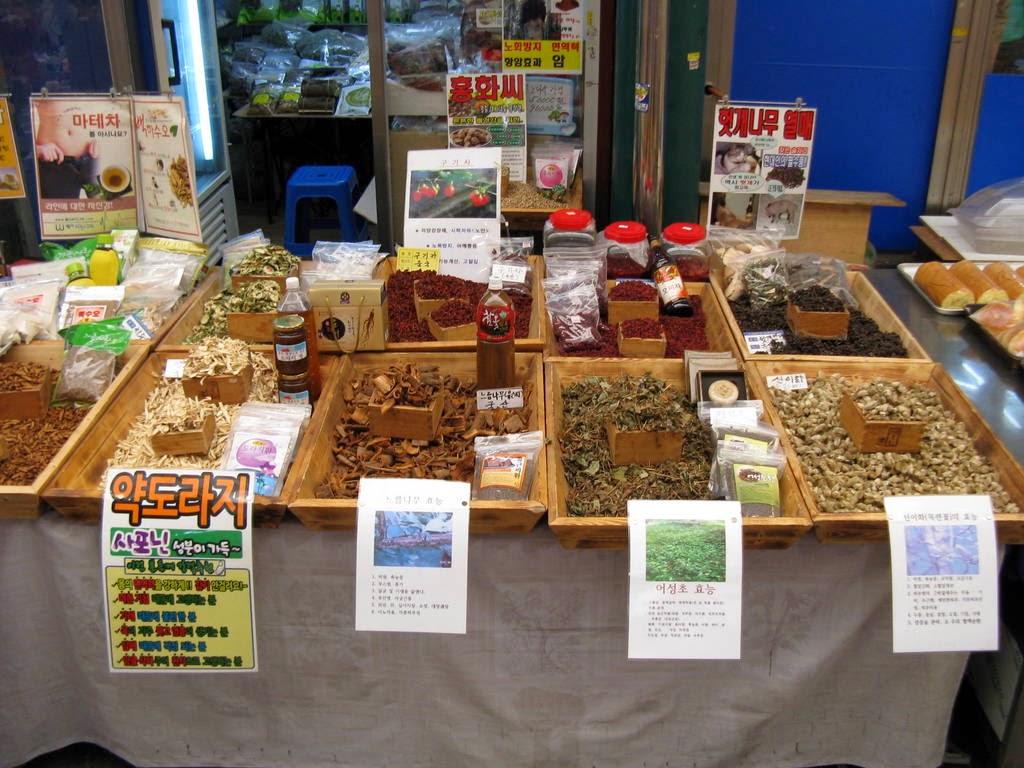 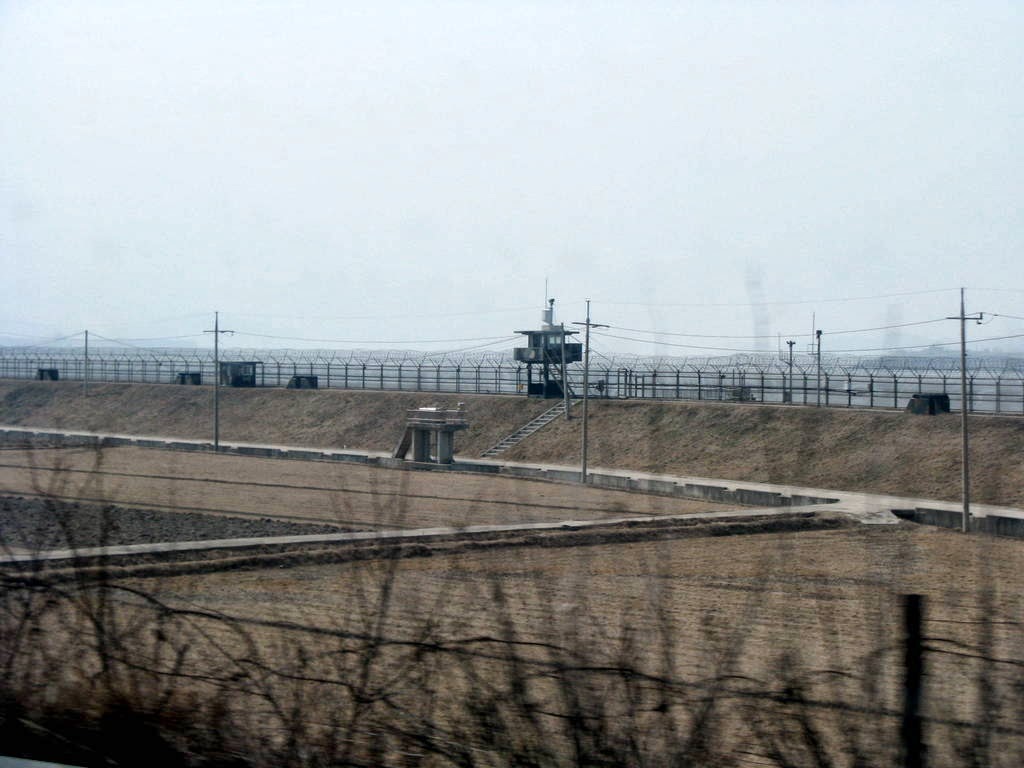 MDL on the South Korean side of the DMZ 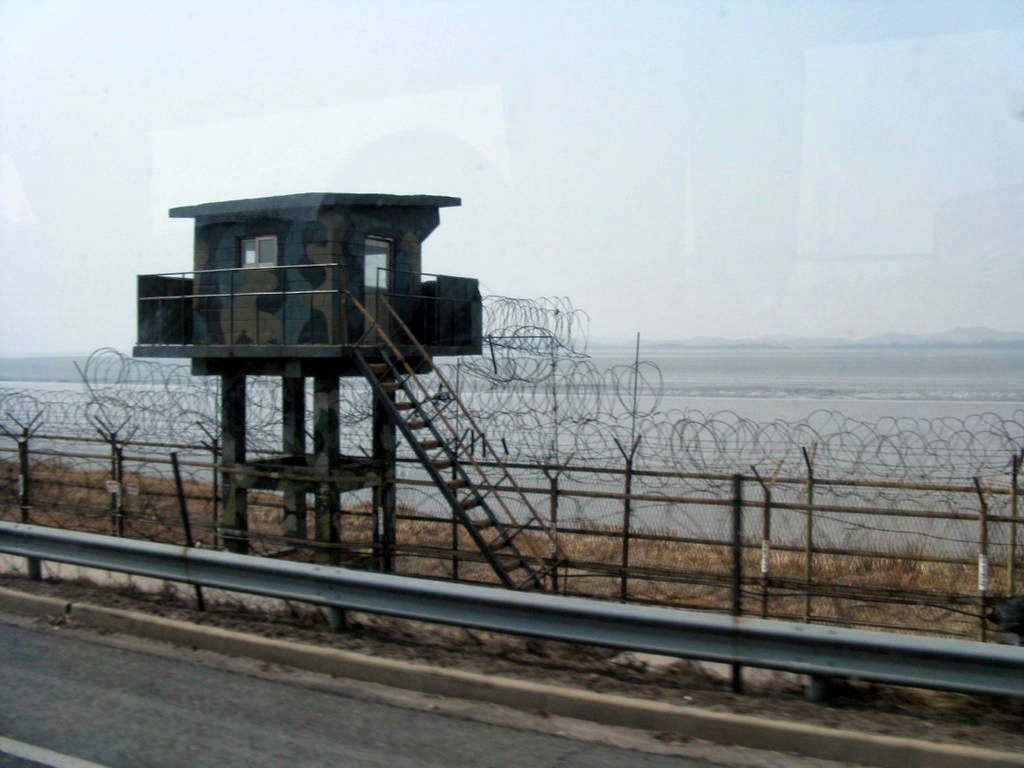 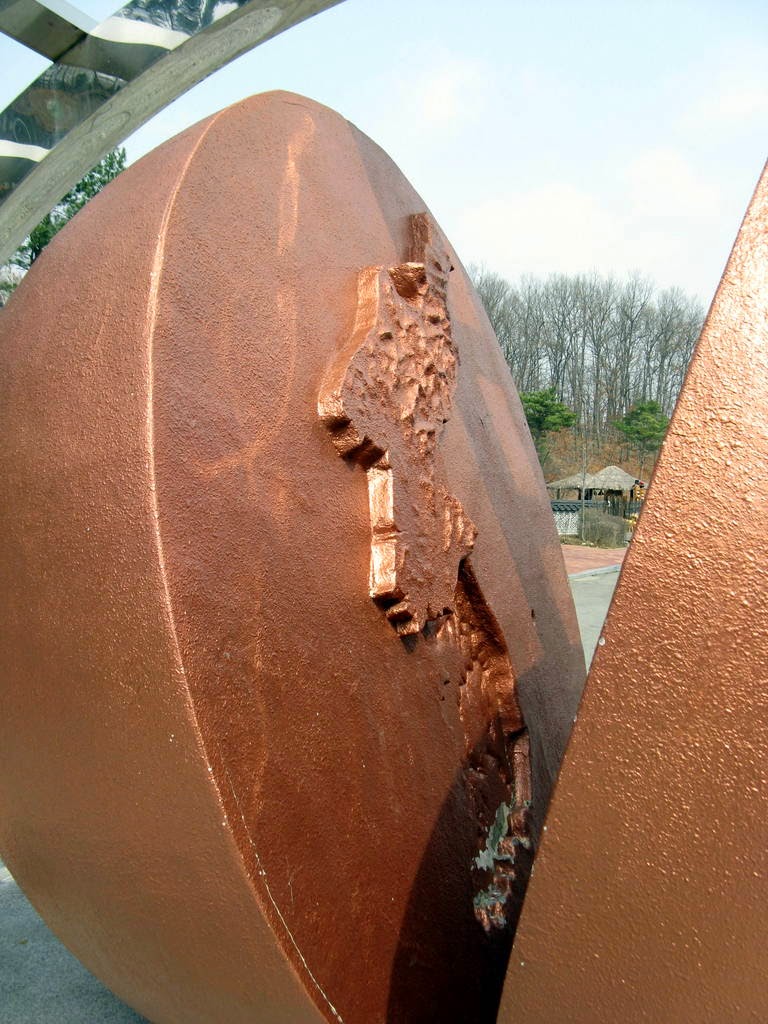 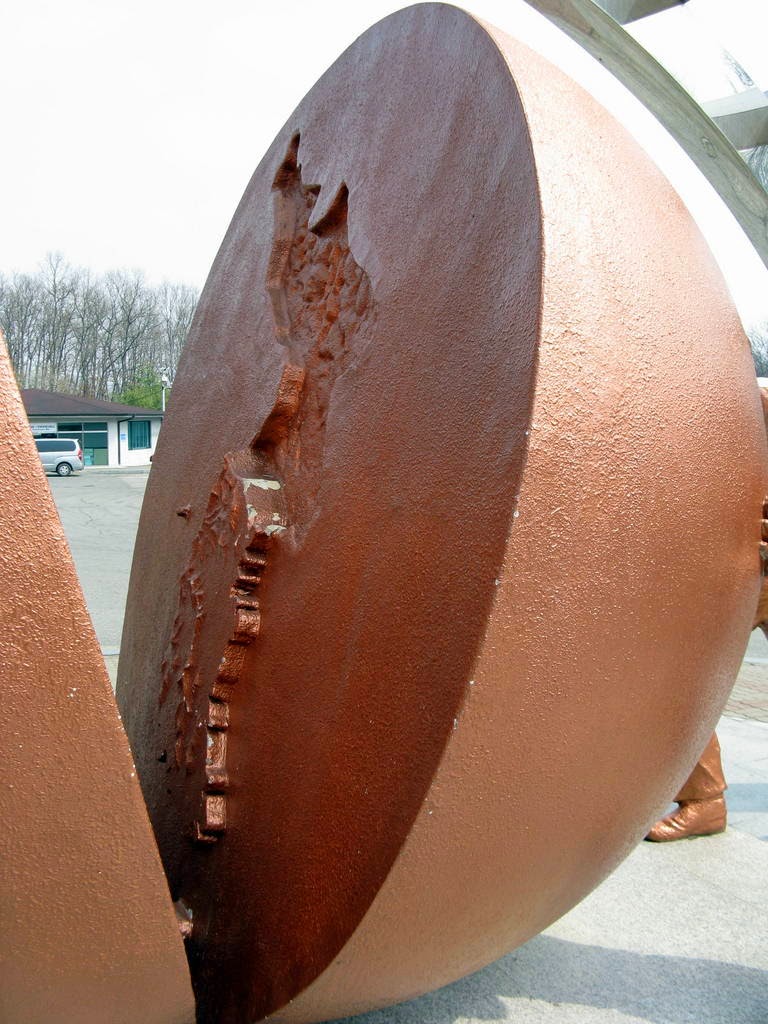 Statue symbolizing the hope of the Korean people for unification. 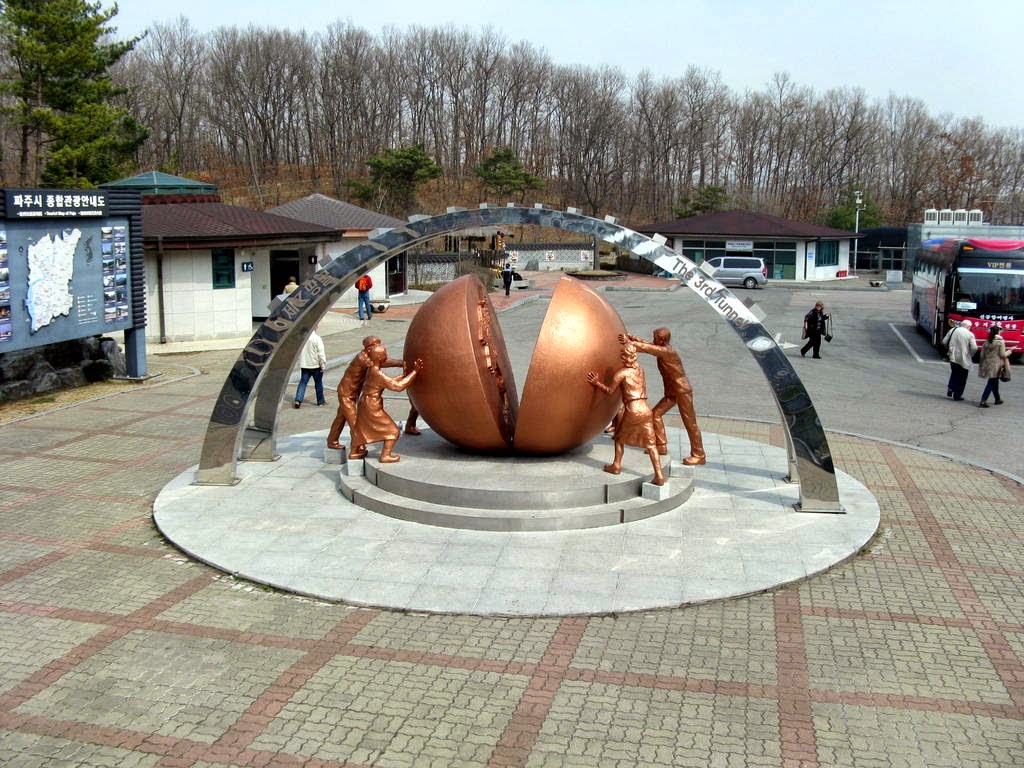 Posted by JudSmithWrites at 3:25 AM