The Great Wall of China

So sorry it has taken me this long to get to the final travel update for our trip to China, Japan and South Korea.  This one covers our day trip out to a section of the Great Wall of China.  What an amazing engineering feat and absolute tour 'd force of human endeavor.  The wall was started in about 200 BC but not much of that wall still exists.  What remains today was mostly built during the 276 year rein of the Ming Dynasty (1368-1644 AD) and has been measured at approximately 5,500 miles long, which includes wall, barracks, guard posts, garrison stations, ditches and natural hills and mountain peaks.  The actual wall itself is only 3,889 miles long...only!

The Wall was built to protect the Emperor and his land from marauding hoards of Mongolians, nomadic tribes and any other interloping intruders.  It worked and the Empire survived. 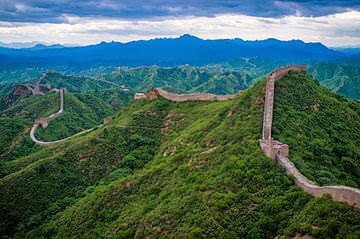 I did not take the photo above.  This is an unusual shot during a point in the season and a portion of the wall that happens to be located in the only verdantly green stretch.  Most of the wall is in semi-arid land with a much harsher environment, as you will see.
﻿
We took about an hour bus ride out to the Wall and the end result was in stark contrast to the flat, highly populated city of Beijing.  This is out in the country, obviously, and very rugged country it is.  Vicki and I were told that when Chairman Mao visited the Wall for the first time, he decided to climb the very section we were at and proclaimed upon his descent that the only way to become a Chinese hero was to climb The Great Wall.  Vicki and I decided to be heroes.  A dubious decision, but I am glad we did it.
STEEP!  OMG.  As you can see from the pictures below, this section we climbed had hundreds, if not thousands of steps, uneven, deteriorating steps with huge worn spots and depressions, each step a different height and depth.  But, we made it.  Something I recommend you do before you get to our age, but even if you wait, it will be worth every muscle/lung challenging step.  I will let the pictures speak for themselves: 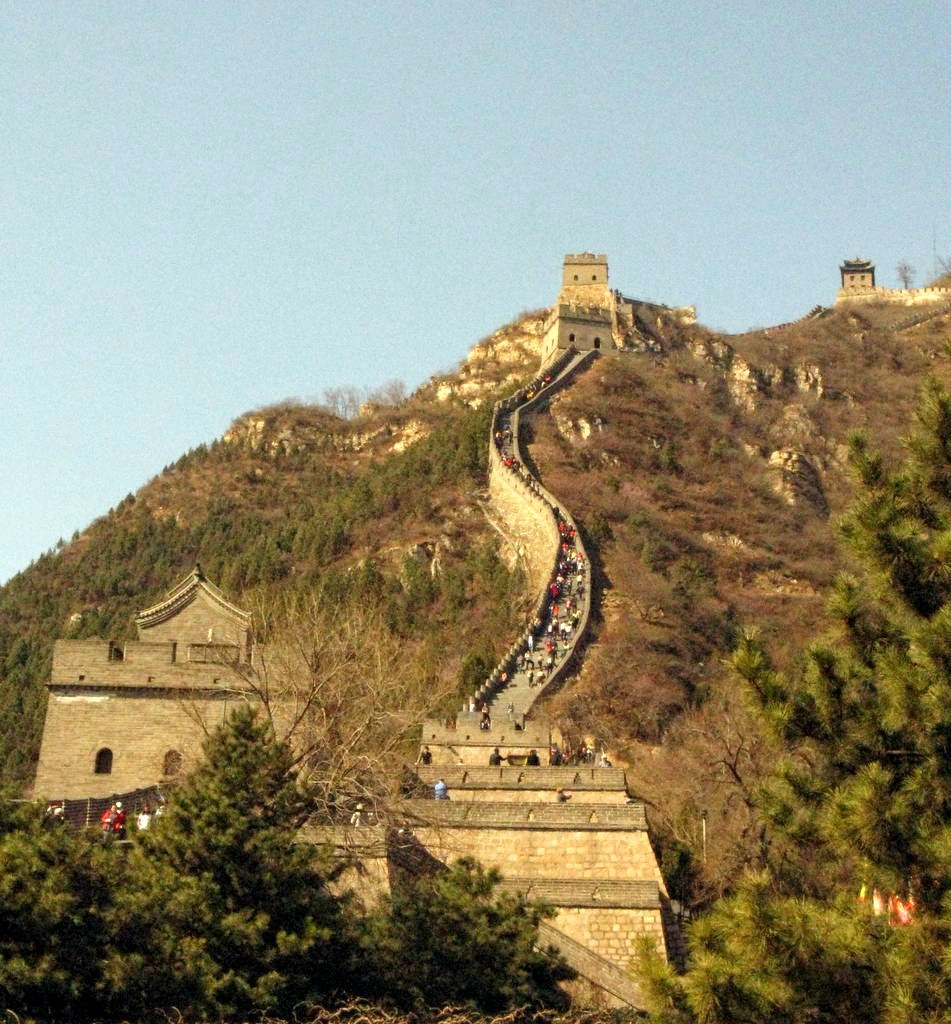 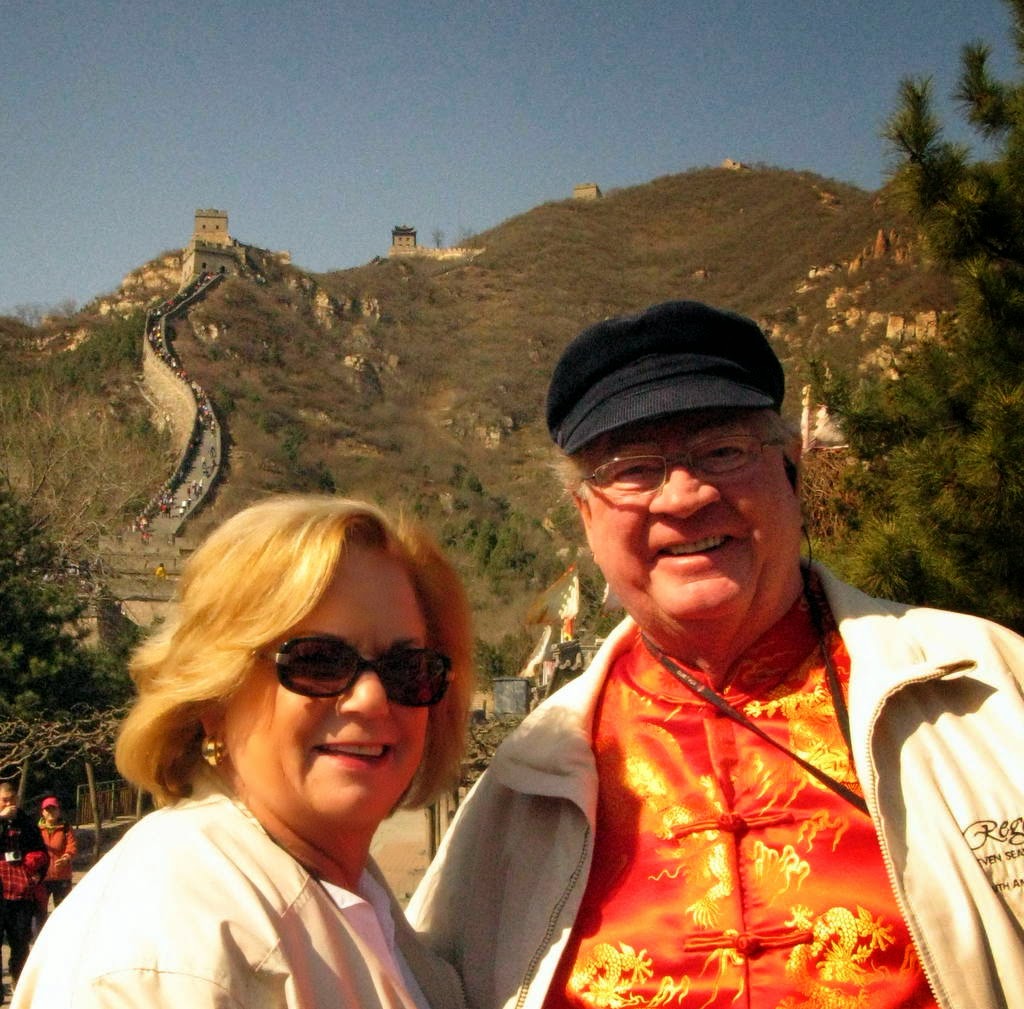 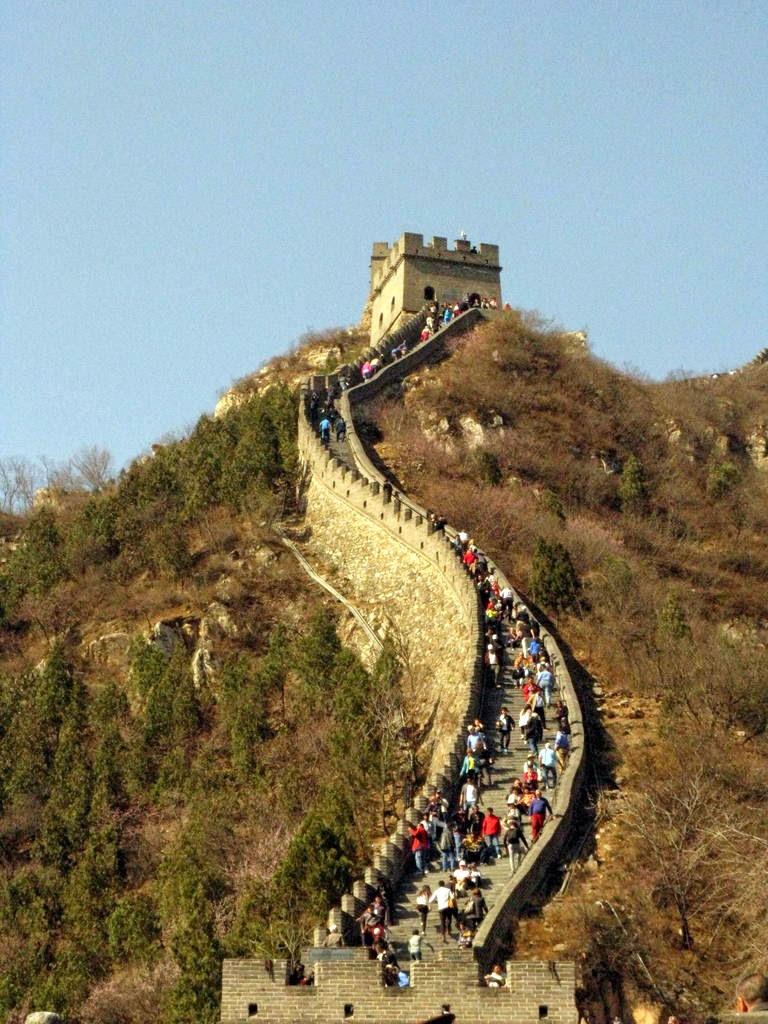 All along sections of the Wall are these endless string of locks with little ribbons on them.  Chinese couples climb the Wall to these various sections and put a lock with their names on them on the cables and then throw away the key to commemorate their undying and eternal love to each other...a love which cannot be broken.  So cute. 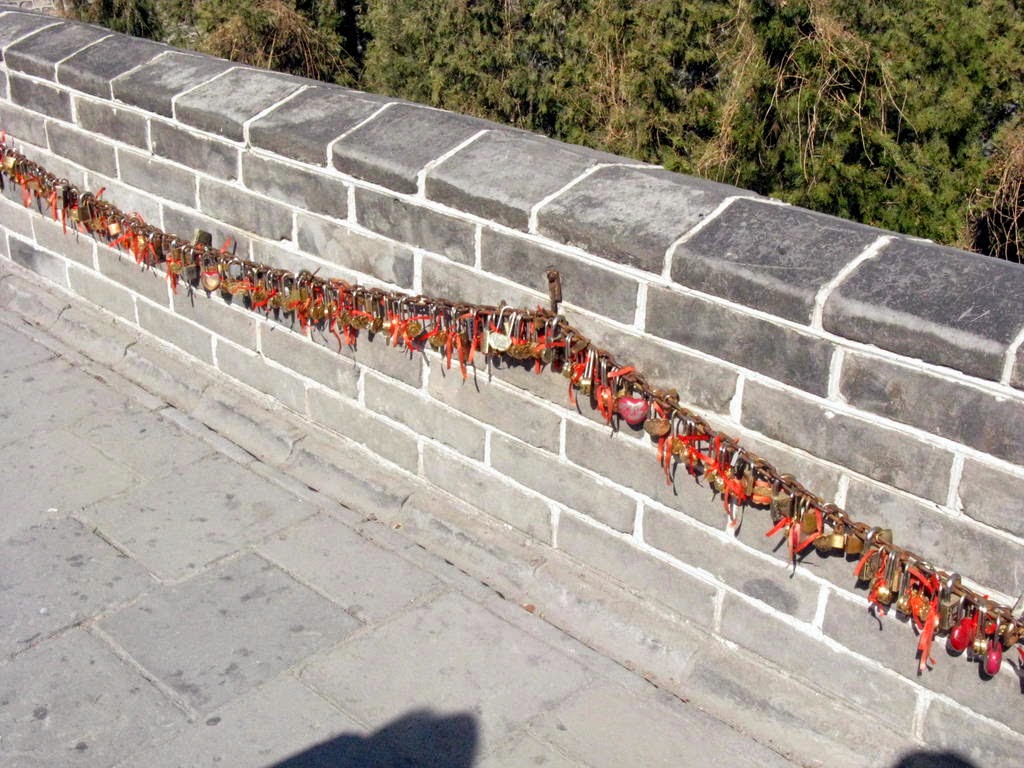 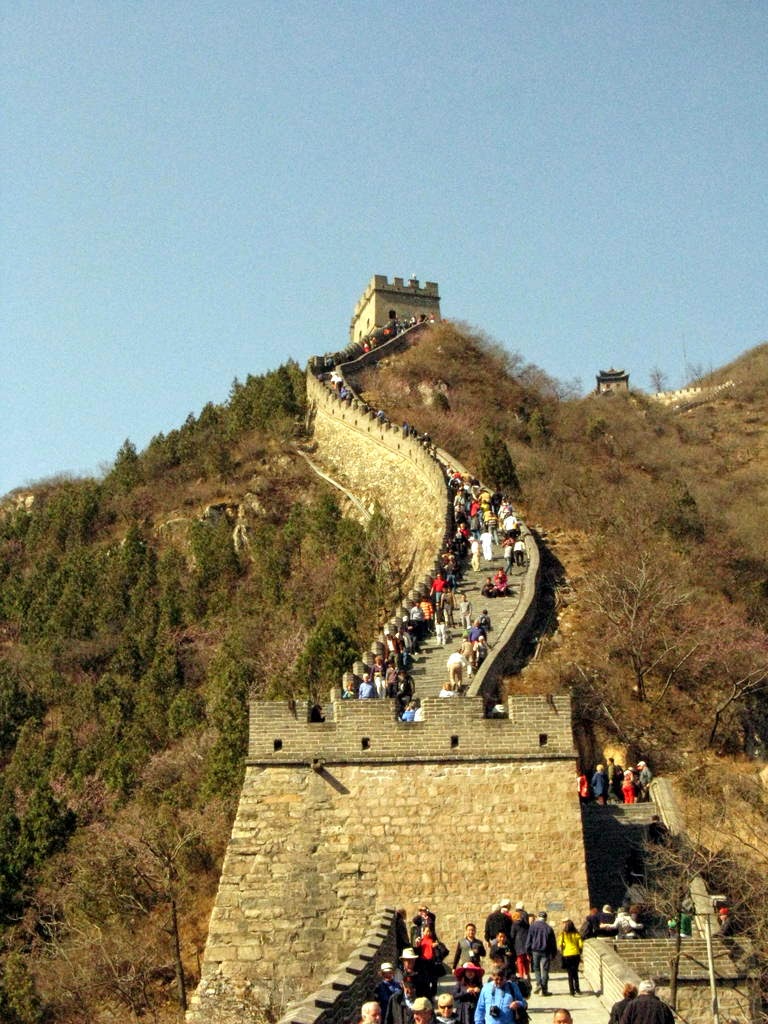 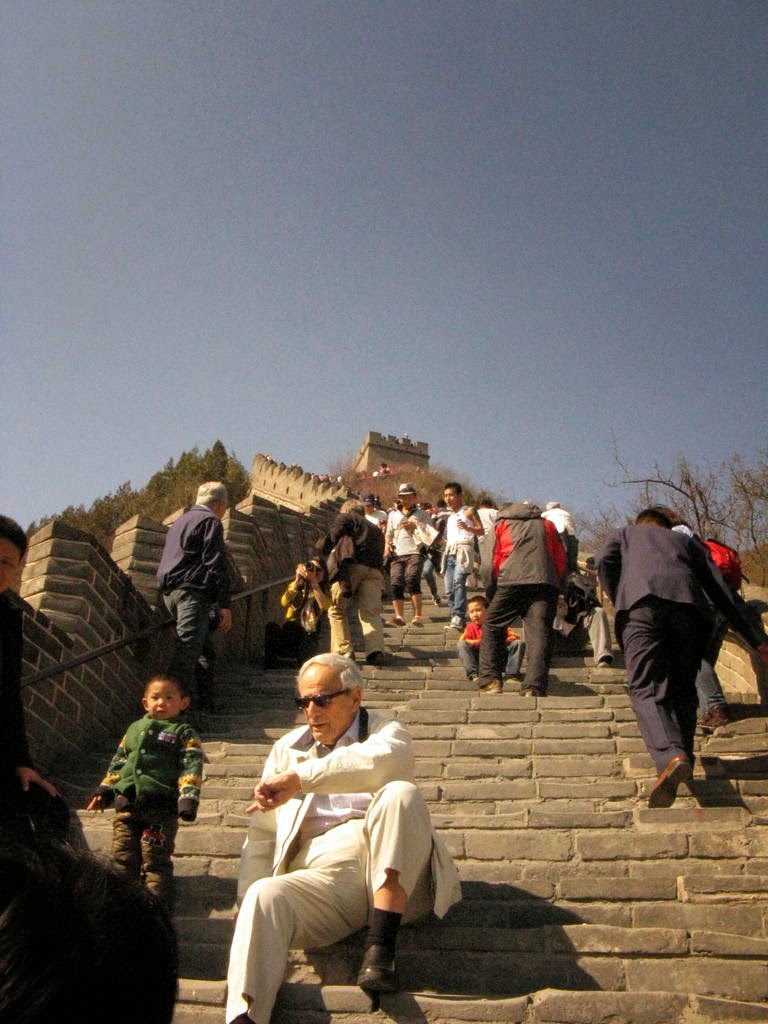 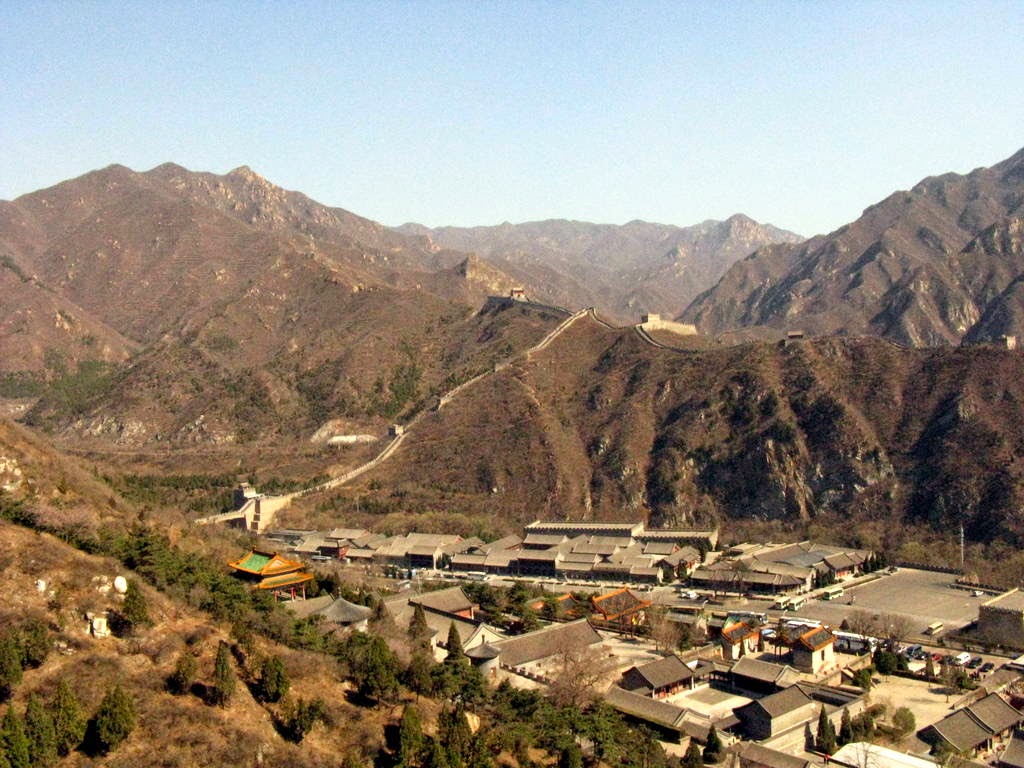 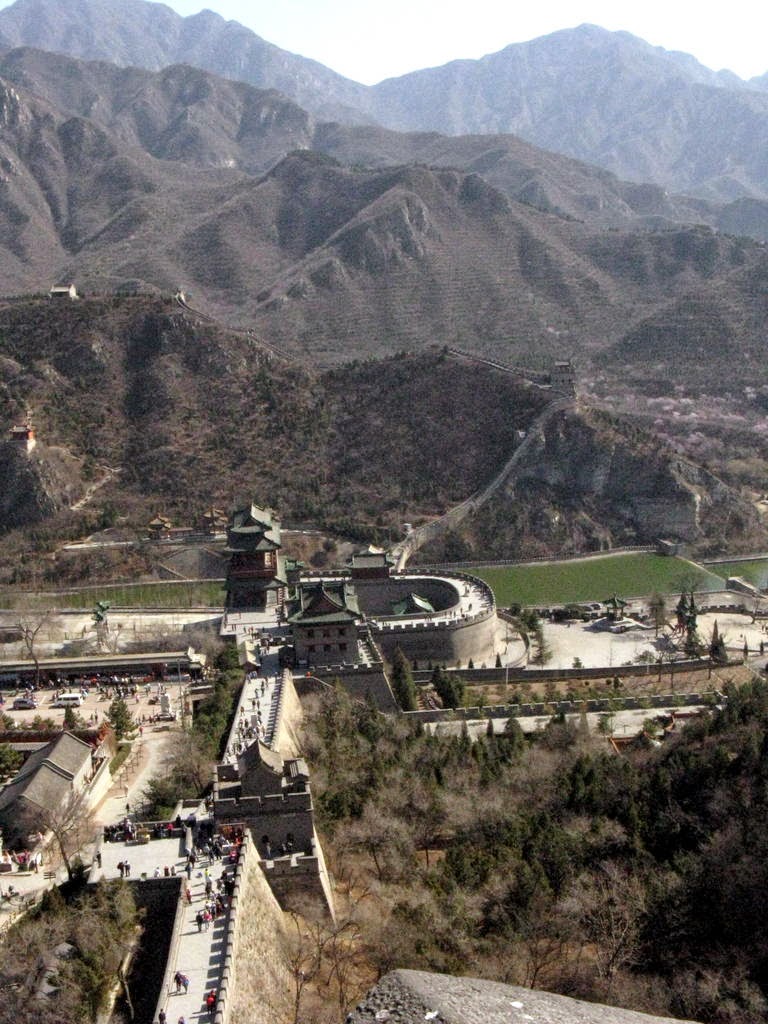 ﻿
There is Vicki, arms raised in a victory salute for making it to the top before I did....of course, I had to stop and take pictures.
﻿
﻿ 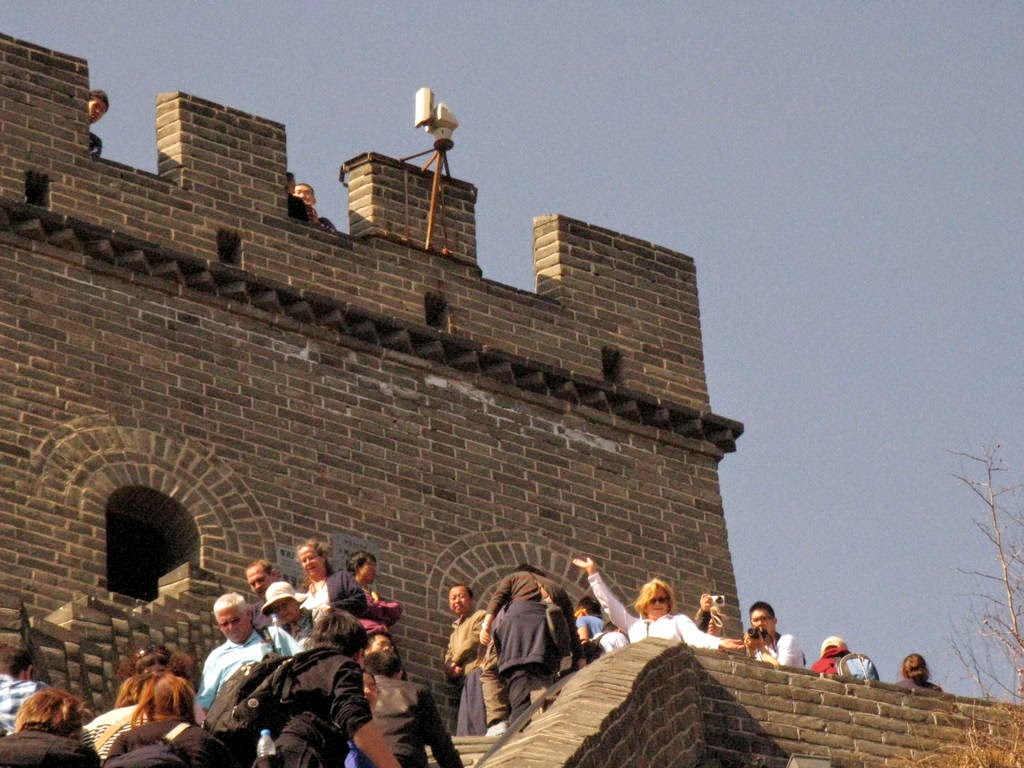 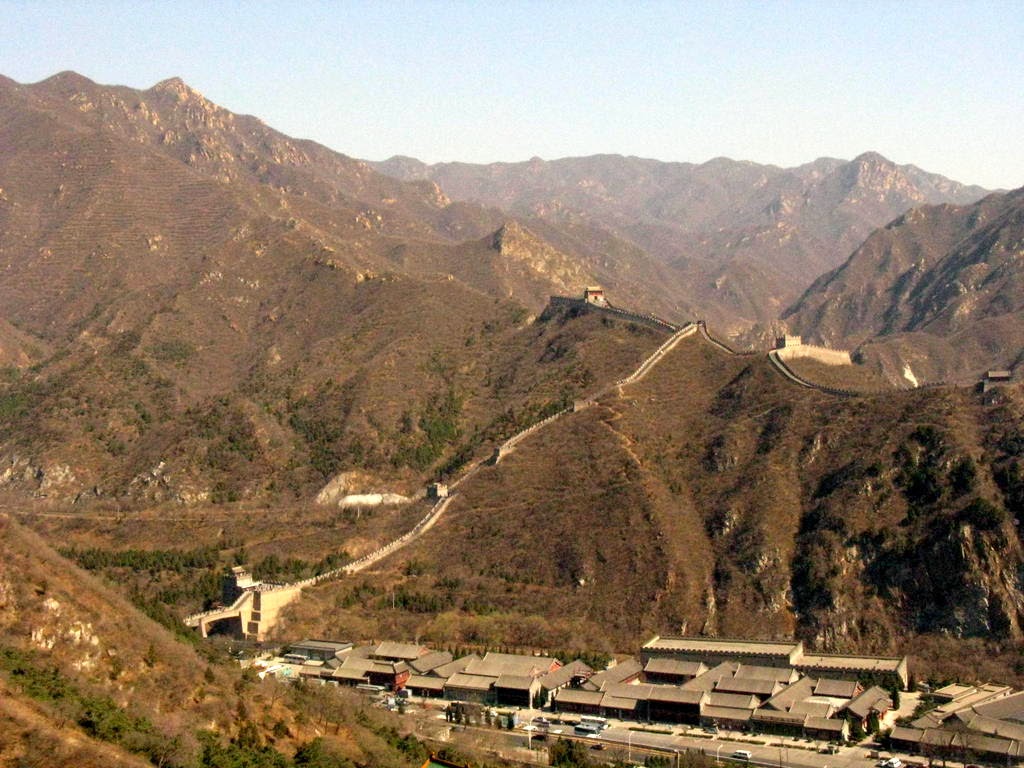 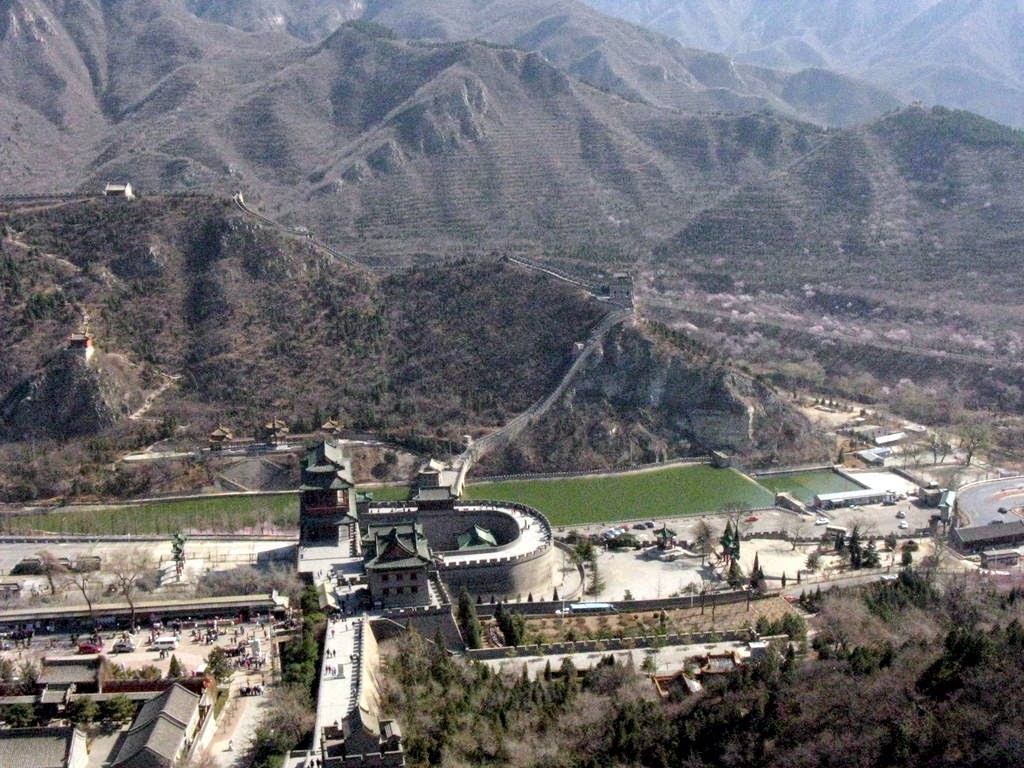 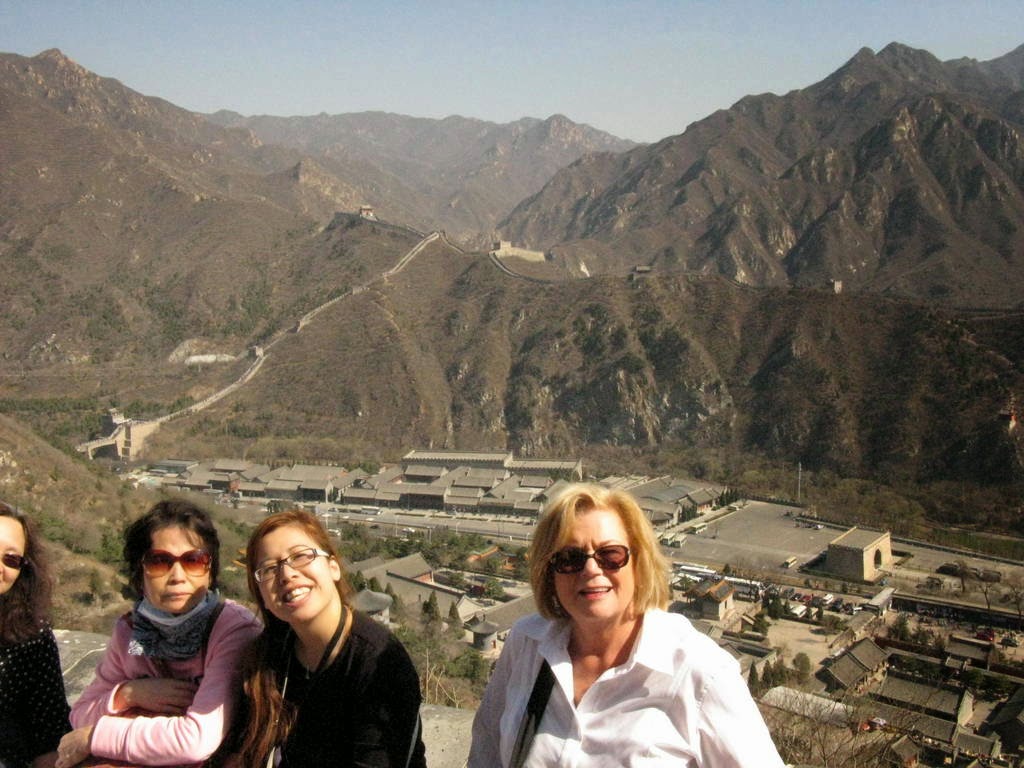 I made it too...just a bit behind.  Isn't it amazing for two sexagenarians with three replacement joints between them? 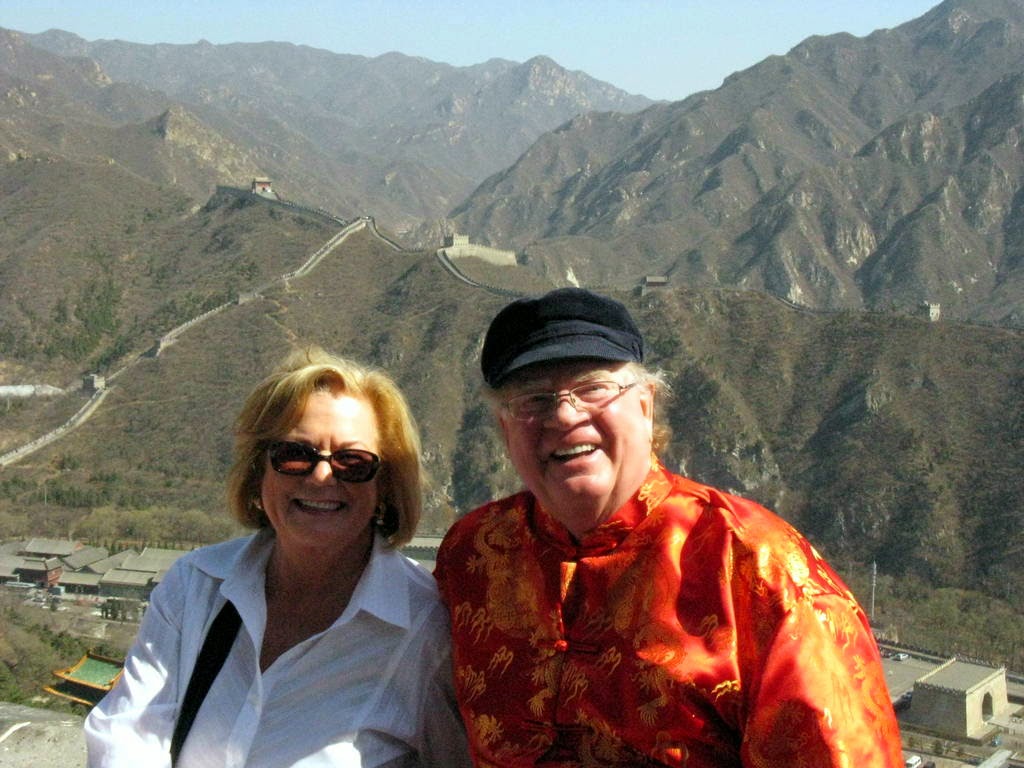 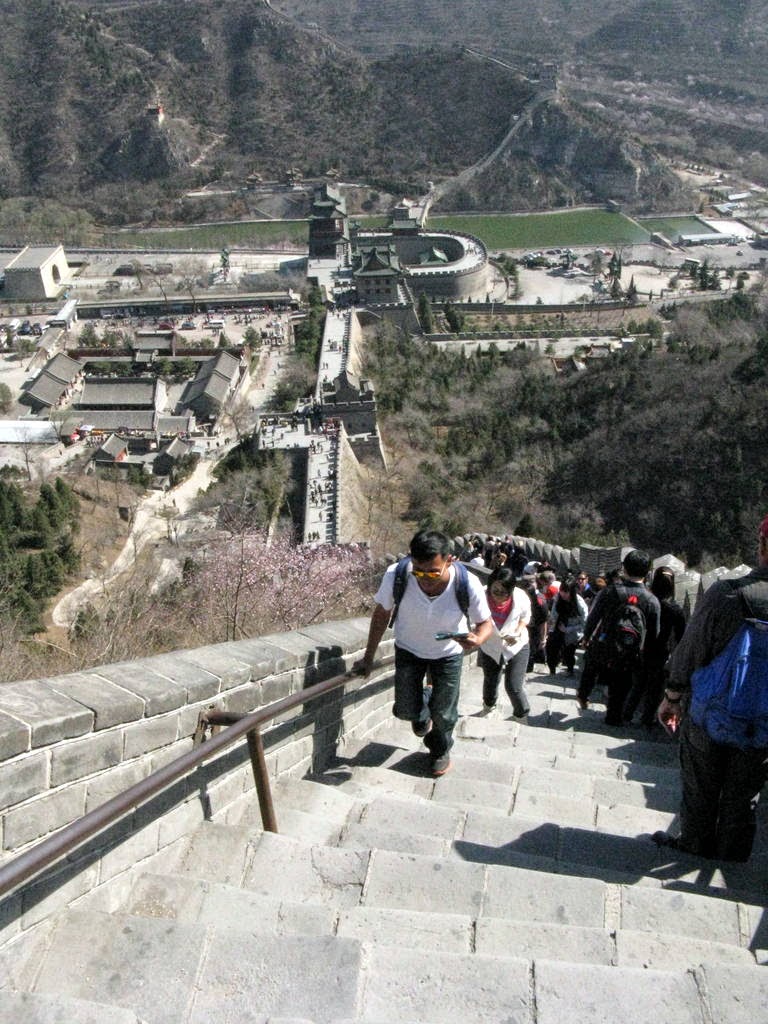 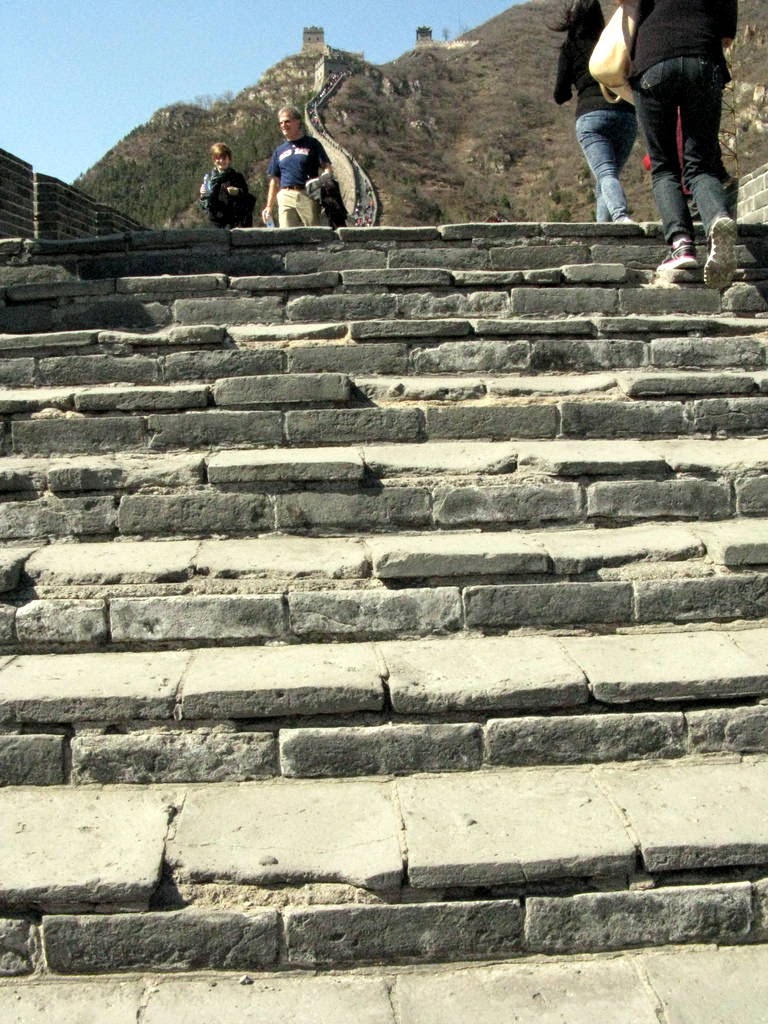 It was a glorious day, not even that smoggy out there and the feeling of history and grandeur was nothing short of astounding.  Put this one on your list of 1000 Places.

Next up, the Emperor's Palace and some comments on the Chinese people.  Until then, God Bless you all.

Jud
Posted by JudSmithWrites at 2:58 PM