Practically every American who made it past the seventh grade remembers from their Civics class the basic idea of the separation of powers.  Our Founding Father's, in their arguably infinite wisdom, designed our form of government with three, independent branches; The Legislative Branch, the Executive Branch and the Judicial Branch.  Each has its own specific powers and responsibilities in regards to supporting, amending and protecting our Constitution.  As a refresher, please review this simple graph below: 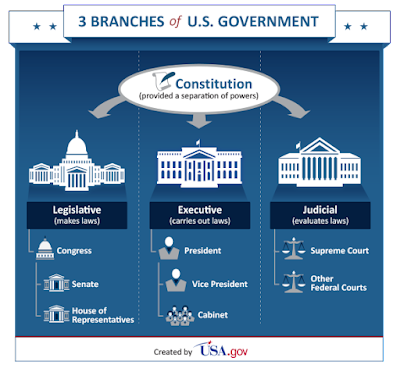 The Congress makes the laws, the President executes the laws and the Judicial evaluates the laws.  It is a unique and, mostly, perfect system of checks and balances.  That is until one of more of them steps outside of their specific sphere of influence.  In today's vernacular, it is called "overreach", but whenever it happens, it not only is a potential threat to the sanctity of the Constitution, but usually involves a sharp division of opinion, often rancorous, amongst the populous.

Two such instances of what some would describe as gross "overreach" occurred when the Supreme Court (Judicial Branch) ruled on matters affecting health care and marriage. First, the SC interpreted a particular phrase found in the Affordable Care Act (Obamacare) to mean that all recipients of medical insurance premium subsidies are eligible to receive them regardless of whether they are in a Federal health exchange or one that was established by an individual state.  Personally, I think this decision was a bit of an overreach in as much as the argument for interpreting this four-word phrase was simply, "We think this is what the Congress intended to say."  Whether it was or it wasn't could have been open for debate; however, no re-election seeking politician is about to voice their true opinion when they can just be silent and let any blame fall on the SC. Those Congressmen who have voiced opposition to this interpretation are branded by the liberal media as right-wing heretics or anti-egalitarian or both and dismissed as irrelevant.

Will this SC "overreach" ensure more Americans will have health insurance benefits?  Yes, it will. Is it a good thing?  Probably for most of the multiple millions of Americans who claim inability to afford insurance premiums on their own without subsidies. Will it cost the American taxpayer's billions of additional dollars...adding to the overall $ 4 trillion dollar cost of Obamacare?  Absolutely. With one cleverly written majority opinion, Chief Justice John Roberts created a new law without regard for the cost but with the full intent of saving, once again, a flawed and incomplete national health care (read that national insurance) system.

Next subject....marriage.  O.K., right up front I will tell you whomever you chose to sleep with is your own dang business. I couldn't care less. The second case of SC "overreach" has, in my opinion, nothing to do with homosexuality. While I, personally, never supported a constitutional amendment to define "marriage" as only "a state sanctioned union between a man and a woman" I admit to choosing that definition for myself.  I do not believe the Federal government should become involved in that personal choice by defining it for everyone. And, as it turned out, our legislators, those responsible for making the laws (see above graph), didn't.  It was our Supreme Court, responsible for "evaluating" laws, who, in this instance, made a law all on their own.  That, my friends, is not only "overreach" but an egregious and surreptitious abuse of judicial power.

At this point, another caveat is in order.  I believe every citizen, regardless of race, color, creed or sexual orientation, deserves to benefit from the same civil rights enjoyed by all citizens.  No law should discriminate, in any way, or act to deprive anyone of those rights. This includes those who choose to engage in a formal union, be it a contractual obligation, a spiritual commitment or a social declaration (i.e.; common law relationship). In reality, we have dozens, if not hundreds of laws already on the books guaranteeing these civil rights to all, but I guess those weren't enough for some.

Unfortunately, what the SC has done is open up Pandora's Box on an issue that should be a private and personal matter.  Merriam Webster's definition of "marriage" already acknowledges same-sex unions and has for years; a concession to political/social correctness.  Some people accept it, some don't, usually based on their long-held religious beliefs, be they an accurate interpretation of Scripture or not.

In the past, individual states had laws that were allowed to supposedly reflect the personal beliefs of the majority of their own citizens.  In some cases, this meant that same-sex marriages were illegal.  I never did agree with that, but that was their choice. Making something illegal just because you disagree with the choice two informed individuals make that does no harm to themselves and/or others is onerous at best. Making something legal, in fact mandatory, for everyone regardless of whether it violates their religious beliefs or infringes upon the exercise of those beliefs is just as, if not more, onerous.

Inside this Pandora's Box, opened by the Supreme Court, is this huge liability for potential lawsuits which will not only clog our judicial system for years to come but cost billions of dollars to resolve.  By legally defining marriage the way they have and forcing this definition to be accepted by everyone nationwide, our SC has created a lawyers heaven. If I am a pastor of an evangelical church somewhere in Jasper, Alabama and I refuse to marry Joe and Harry, I could, and probably will be, sued.  If I am a member of a Lutheran congregation in Austin, Texas and we decide we do not want to allow Beverly and Becky to be wed in our sanctuary, we could, and probably will be, sued.  If I am a devout Catholic wedding planner in Gladwin, Michigan and Bob and Ted, and Carol and Alice, want to have me plan their double-gay wedding and I refuse on religious grounds, I could, and probably will be, sued.  Ultimately, the Supreme Court will have to decide all of these and a thousand more potential conflicts.  Many of them will come down to which is more important, gay rights or religious rights.  Only time will tell if our Legislature, remember that's the branch who is supposed to be making the laws, will step in to resolve the conflict with new legislation designed to strike a balance between protection of the rights of the gay/lesbian minority while not violating the religious (moral, ethical) sensibilities of the majority.  Or, we can just let the New Legislature run rampant over the constitutionally mandated balance of powers. In that case, my apologies to Mr. Hamilton, Mr. Jefferson, et al.

Comments?  Give me your opinion.     Jud

Posted by JudSmithWrites at 12:57 PM No comments: