Contrary to the common phrase of the day, namely “Size Doesn’t Matter”, when it comes to our Universe, it is the only thing that does.  Humans have been given the gift of being able to look at everything from the smallest particle yet detected on our planet, all the way to the edges of our Universe.  To put that into perspective, the Quark is approximately 0.00000000000001 centimeters or 6000 billion times smaller than a grain of sand.  When our most powerful telescopes look to the edge of the heavens, the furthest light we see has traveled 46.5 billion light-years or 4.40×1026 meters. The observable universe is thus a sphere with a diameter of about 93 billion light-years or 8.8×1026 meters.

It boggles the mind to attempt to conceive of that range of vision and some people are just not capable of it; however, it has always captivated me.  I am not a scientist, astronomer or professional in any of those fields.  I have no formal education in these matters and, despite the fact that astronomy has always been a hobby, I am the consummate amateur. My father was an engineer involved in the space program back in the 50’s and 60’s, working toward the goal of putting man on the moon.  Sadly, he passed away in April, 1969, just three months short of that momentous feat being accomplished. I am grateful he instilled in me an interest and curiosity that has continued to this day. It is from that interest in space and our universe that I observed something which sparked an idea I think has merit.  I share that with you here.

Our universe is highly complex and our understanding of it, as vast as it may seem, is in its infancy.  The universe is estimated to be at least 2.9 quintrillion miles across (2.9 x 1017).  That’s 2.9 with seventeen zeros after it, for those of you who are counting.  Longer than a Sunday drive at light speed (186,000 miles per second).

So, let’s all agree, that is a pretty big space, no pun intended.  And what fills all that space? Well, the Hubble and other huge telescopes at our disposal have helped provide the answer.  Hold your hand out in front of your face on a starry night and look at the nail on your little finger.  The Hubble telescope pointed itself at that incredibly small area of space, in the constellation Ursa Major, and took a 100 hour exposure.  The results are known as Hubble Deep Field and were absolutely amazing.  Every spot of light that you see in the photo below is a complete galaxy.  Not individual stars but full galaxies.  There are over 10,000 galaxies in just that small area alone. 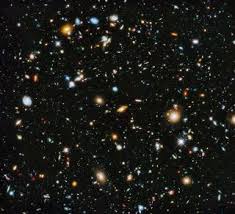 Based on this and other input, astronomers believe there to be something like two trillion galaxies in our universe.  The number of stars in a galaxy varies, but assuming an average of 100 billion stars per galaxy means that there are about 1,000,000,000,000,000,000,000,000 (2 x 1024) stars in the observable universe!  God only knows how many planets, because I know I can’t count that high.

That is a lot of matter in a huge space.  Interestingly, however, all of those stars, planets, moons, other objects, gasses, and dust don’t begin to account for the mass, measured by gravitational pull, that is calculated to be in our universe.  So scientists have introduced the concept of Dark Matter.  Dark matter is a form of matter thought to account for approximately 85% of the matter in the universe and about a quarter of its total energy density. Most dark matter is thought to be non-baryonic in nature, possibly being composed of some as-yet undiscovered subatomic particles. There are some cosmological theories about this nonluminous material that is postulated to exist in space.  They speculate that it could take any of several forms including weakly interacting particles (cold dark matter ) or high-energy randomly moving particles created soon after the Big Bang ( hot dark matter ).  No one really knows, but I have another theory.

Today scientists and astronomers generally accept the Big Bang Theory for the beginning of our Universe.  It is not necessarily an explosion of solid matter but a point of origin from which space expanded out in every direction equally from a single point.  The universe is still expanding rapidly, but where was the single point from which our universe expanded? Enter the Black Hole.  Black holes are a class of astronomical object that have undergone gravitational collapse, leaving behind spheroidal regions of space from which nothing can escape, not even light. Observational evidence indicates that nearly all large galaxies contain a supermassive black hole, located at the galaxy's center.  Perhaps our universe came from a reversal of light and matter through the mother of all black holes.  Then there is the theory of the Big Crunch.  The Big Crunch is a hypothetical scenario for the ultimate fate of the universe, in which the expansion of the universe eventually reverses and the universe re-collapses, ultimately causing the cosmic scale factor to reach zero, an event potentially followed by a reformation of the universe starting with another Big Bang.  Save that thought.

So what if there really is no dark matter? What if the unseen gravitational pull and apparent mass is from outside our universe, not inside?  And what if the origin of the universe was from a Black Hole at the center of our universe, like all of the black holes at the center of every galaxy?  What if there are thousands of universes, all interconnected in a huge spiral configuration with matter being interchanged from one to the next?  What if there is a Big Bang and, fifteen billion years later, there is a Big Crunch?  And what if that Big Crunch fostered another Big Bang through a conduit into another adjacent space?  Another universe.  Repeat, repeat.  Take a look at this: 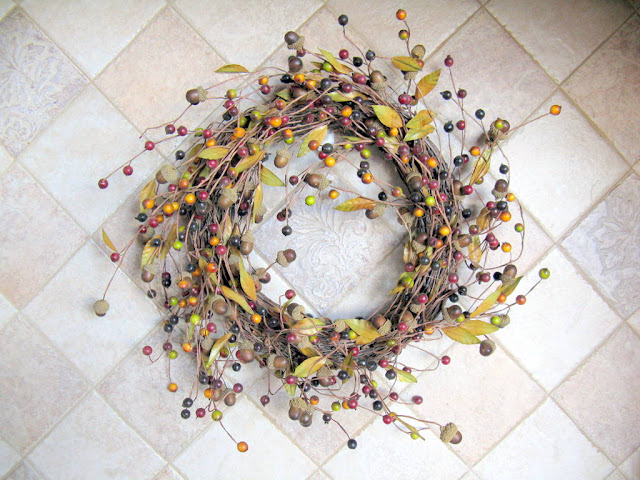 Take away the leaves, take away the acorns.  Imagine each of those different-sized berries, all interconnected within the spiraling mass, are individual universes, some larger, some smaller, some near to each other, some far.  Imagine the gravitational dynamics between each universe, creating the impression of measurable mass within each.  And imagine that they come and go, over billions of years, new universes being formed from light and matter emerging from the tip of a black hole and expanding equally from the center.

No new matter is created or destroyed in the spiral.  It is just reduced to gas and dust through the crushing gravity of the black hole tunnels, spewed forth anew, via another Big Bang and then reformed into new galaxies with their stars and planets created over billions and billions of years. 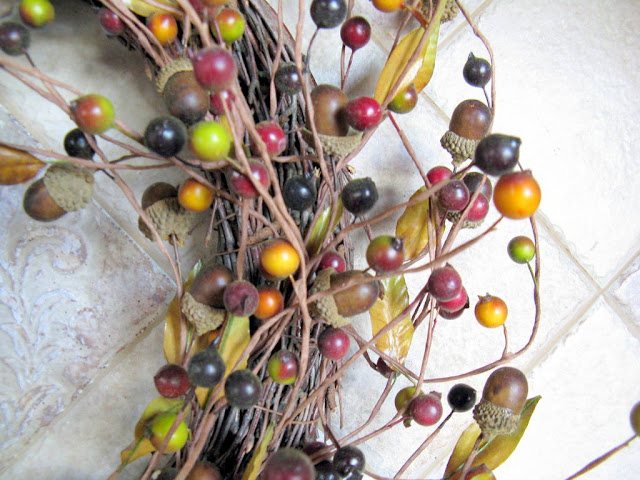 I know this is a radical concept, but not too long ago, people thought the Earth was flat, the stars we could see in the night sky was all that was there, and the smallest particle was the atom.  I don’t think it is any crazier than thinking that 85 % of the mass detected in our universe is from “dark matter” that no one know the composition and no one can see.

I am certain that scientist and others far more learned than me could easily shoot holes in this theory….but, what if?  Maybe it is time to look at the Bigger Picture.

PS:  And, what if there are thousands of these universe filled spirals?  OMG!

Posted by JudSmithWrites at 1:40 PM No comments: