Greeting from the Pacific Ocean,

I hope those that are interested in travel will follow us as we cruise the Pacific with a final destination being Tahiti in French Polynesia.  It will take us sixteen days to get there,
arriving in Bora Bora on December 21st.

We will be five days at sea and reach Kauai in the Hawaiian Islands on Wednesday morning.  After touring Oahu and Maui we will be at sea for another four days before we reach Nuka Hiva in the Marquesas Islands, then Fakarava in the Tuamoto Islands before we reach the French Polynesians. 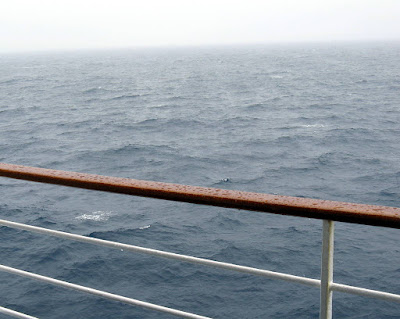 We escaped the cold of Texas for this Holiday Cruise for warmer climes.  Unfortunately we woke up to 16mph winds, 61°F, six foot seas and rain, as you can see from our balcony.  Oh well.
So how did the French Polynesians get discovered and populated, you ask?  Well, I will tell you.  It was not by seafarers from South America through random drifting as some people speculated early on.  No, no.  It was via intentional navigation by natives of Taiwan around 3000 BC.  They sailed first to the Philippines then into the region of the South Pacific now known as French Polynesia, a huge area south and east of Micronesia.  Think of it as a gigantic triangle with the northern point being the Hawaiian Islands, the southeast point being the Easter Islands and the southwestern point being New Zealand.

The sailors traveled a spreading route from Micronesia to the Marquesas to Tahiti to Easter Island and finally to Hawaii.  They did it in twin-hulled sailing canoes which could attain speeds of 7 knots and cover anywhere from 100-150 miles per day.  There were several possible reasons for these early explorers to do what they did.  Adventure, pride in their navigational skills, avoiding conflict, exile, escape, conquest, even following the migrant birds of the region…but one thing is certain these were hardy, brave individuals who knew how to use the stars, the winds, the currents and other navigational signals to get from point A to point B in uncharted waters. 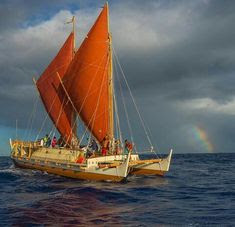 Fortunately, the islands and atolls in this huge triangle are relatively abundant with a maximum of 310 miles between them.  Some are as close as 50-200 miles between the groups, a total of 23 contact zones.  These large sailing canoes were 65’ long and 20’ wide (beam) but could carry between 40-50 people.  They could last between 2 and 3 years before the seas and elements claimed them. They provisioned the canoes with breadfruit, coconuts (for food and water), pounded taro root, and, of course, fish they caught on the way.  Enough for 30 days plus a reserve.  Some of the islands they encountered also provided wild sweet potatoes and nuts.

How do we know all of this, well, it is a long story, but fish hooks and oral traditions tell us what later sailors from the 19th and 20th centuries confirmed by duplicating their predecessors travels as well as their heroic journeys.

I will continue to keep you updated on our progress with hopefully more enticing pictures than the above.  In the meantime you can email me questions, if you have any and, of course, I welcome your comments on this blog.


Posted by JudSmithWrites at 3:10 PM