We have finished our crossing to the Hawaiian Islands, a total of 2,359 miles from Los Angeles and arrived late at 1:00pm on Wednesday, December 11th.  We are docked at the port of Nawiliwili on the southeast coast of Kauai, known as the “Garden Isle” covering an area of 562 square miles, the fourth largest and oldest of the main islands.  We are at latitude 21°57.17’ N and longitude 159°21.51’ W. 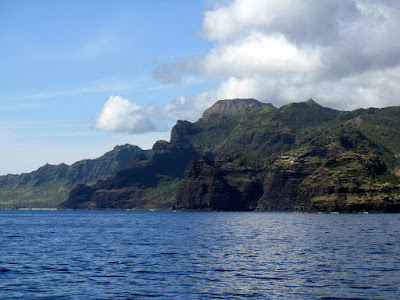 I mentioned that we were late.  We were supposed to arrive at 8:00am this morning, but heavy seas caused the Master (Captain) of the Navigator to make the decision to slow down for the comfort and safety of the passengers.  We reduced speed from 17 knots to 6 knots.  Of course before that occurred I decided to do my morning walk up on the Deck 11 track and when I pitched left and the ship pitched right, I pulled a groin muscle and couldn’t even make it back to our cabin without the help of a deck steward with a wheelchair.  Not terribly serious, but one more example why traveling with me is always an adventure for Vicki.  She has been great about it, as usual.

So our morning tour on Kauai, which included a Wailua River Cruise and visit to the famous Fern Grotto, was cancelled and it has given me a chance to rest my leg and, hopefully, recover enough for our tour tomorrow in our
next port on Oahu.  More about that next time. 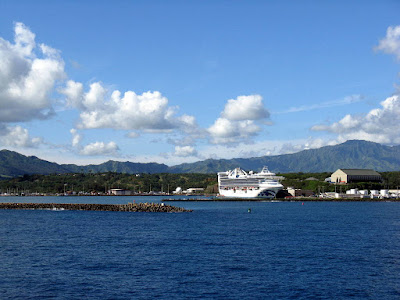 Kauai is the wettest place on the planet.  It averages 450” of rain a year.  It set a world record of 636” in 1986.  The local “god”, Lono, is the God of Taro, which is the principal source of protein for the islanders, Fertility, Rainfall and Peace.  Looks like he has been doing a fabulous job on the rainfall part.  Can’t speak to Fertility.

BTW, when Taro is pounded into Poi, eaten with the fingers, it is said to release the “Spirit of Haloa” and when served at family gatherings the local rule is that it puts an end to any arguments or quarrels within the group.  Guess we should have served more Poi at the Smith Family dinners.

Over 70 % of the island of Kauai was impacted by Hurricane Iniki which slammed full force into Kauai in 1998.  At the time, Vicki and I were celebrating our 30th Wedding Anniversary on the island of Maui, a mere 100 miles away.  Ask me about that adventure some time.

One of the most prominent features of Kauai is the Waimea Canyon.  Known as the “Grand Canyon of the Pacific” it is a spectacular formation which defies description.  We took a helicopter tour of it several years ago and were amazed at the grandeur.  The whirlybirds take off from Nawiliwili ever few minutes, like the one below, ferrying tourists to this natural wonder. 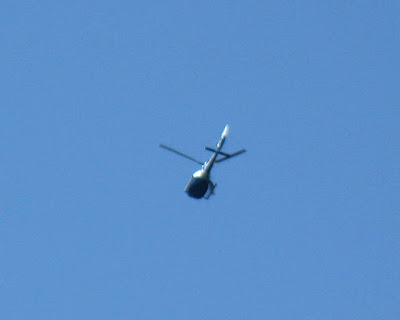 This island is the winter home of literally thousands of humpback and gray whales who journey here every year to birth their calves and nurse them  after having gorged themselves all summer up near the Bering Straits. This is about half the whale population from northern climes, the other half trek to Cabo San Lucas.  Smart animals.
A female whale’s milk is about 60% fat which accounts for the calves being able to gain about 8.5 pounds per day.  Just slightly more than I have averaged so far on this cruise.

I mentioned in an earlier post about our guest lecturer, Dr. Tom Jones, an astronaut who helped build the International Space Station (ISS).  The ISS covers an area about the size of a football field traveling about 17,500 MPH about 220 miles above the Earth’s surface.  It weighs, at the moment, about 816,349 pounds, and is still growing thanks to astronauts like Dr. Jones and his fellow scientists from Russia, China, France, Spain and other space partner countries.  It currently has four principal laboratories.  One is a Cold Atom Lab, which cools atoms to -370°F or near “absolute zero”.  This allow them to bring the atoms to a near standstill so that they can examine them more closely for scientific reasons that are above my paygrade.  The ISS has a Veggie Chamber, which is growing all kinds of plants in the weightless conditions of outer space, and a Robotics Lab, which designs and builds robots for performing all manner of tasks in space.  There is also what is known as an AMS Dark Matter Lab, which is attempting to find and measure the gargantuan gravitational forces which account for over 70 % of the matter in our universe.  Look back at a previous blog post of mine for an alternate theory on what this is all about.  Astronauts sign on for a six month stay on the ISS each time they go up to join the team which rotates six resident positions, three at a time.

Space travel is being developed at a fairly rapid pace again.  NASA, after retiring the Space Shuttle program is paying Russia $ 1.3 million dollars for each astronaut we send to the ISS, per trip.  Now private firms, run by corporate billionaires, like Jeff Bezos, who owns Blue Origin, Elon Musk, who runs Space X(with its highly reliable Falcon 9/Dragon rockets, shown below), and Richard Branson with Virgin Galactic.  All three will be contracting with NASA to shuttle astronauts back and forth to the ISS in the near future, saving taxpayers millions of dollars and keeping the revenue and jobs in the good ole USofA.

These firms are also putting together tourist space travel programs. For those of you who are interested, an overnight room at the ISS is only $35,000.00 per night.  I thought that was essentially reasonable.  But, OH, the transportation, to and from, is extra and is a bit pricier at just under $50 million round trip, give or take.  I just hope after this cruise they don’t charge by the pound.

Enough for now.  Hope you are enjoying the trip so far.  Give us a shout or a comment or two, if you feel so moved.

Much love to all,

Posted by JudSmithWrites at 6:05 PM